Professor Kevin Dunn is leading a team of researchers to determine the effects of the NSW Police Community Engagement Counter Radicalisation model.  This Initiative aims to engage with communities to promote positive partnerships and increased understanding of NSW Police Force counter terrorism response arrangements. This research aims to measure its level of success in engendering trust and cooperation. In particular, it looks at the strength of the partnerships it has formed with members of the Australian Muslim community in the face of community crises, for example, the protests in Sydney in response to the "Innocence of Islam" video. The research team included Drs Michael Kennedy and Jan Ali, and the Research Assistants Rosalie Atie and Virginia Mapedzahama. 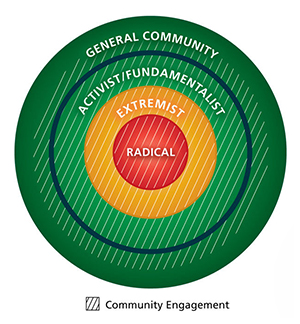 There are many measures of the success of counter terrorism policing. Critical indicators include whether a terror event is prevented and whether people susceptible to violent extremism can be convinced against extremist actions. Another indicator of the success of counter terror policing is the extent to which there is co-operation and trust between communities and police. These relations need to have a depth and resilience sufficient to withstand crises and events. It is during these moments that such relations are most useful and important, yet it is also when they are most imperilled.

Building trust between communities and police is no easy task in the context of widespread anti-Muslim prejudice (Islamophobia), high levels of experience of racism by Australian Muslims, perceptions of over-policing among some sections of Muslim communities, as well as a perception that governments have been hostile to and unfairly critical of Muslims. There is a need to generate sufficient levels of trust and transparency so that further community engagement is not jeopardised by crises, critical incidents and major events. The relations that are built need to be resilient, and this level of resilience is another measure of the success of the community engagement model. It is this resilience that was the subject of this focused study.

A survey instrument was used to determine the effects of NSW Police Community Engagement Counter Radicalisation model in terms of the strength of the partnerships it has formed with members of the Australian Muslim community. The survey collected data on community perceptions of how the police deal with community crises (public statements, arrests, public order); the nature of the contact that occurs between police and the community; and the outcomes of those relations. The total completed survey sample was 185, comprising of respondents from broad social, demographic and cultural axes. The surveys were delivered at a variety of community sites as well as Sydney Mosques and Islamic Centres, in July to August 2015. Office bearers, staff and volunteers from the Islamic Sciences and Research Academy (ISRA), conducted the face-to-face surveys.

Two focus groups involving community representatives and leaders were conducted also by ISRA in August and September 2015. Participants reflected a diversity of age, ethnicity, and representativeness within the community. The focus group questions were designed to investigate perceptions of police in general as well as police responses to crises more specifically, and to enquire further into questions of trust between the community and police.