Past News and Events

Navigating The City As A Young Muslim, a powerful interview with the Challenging Racism Project's Rhonda Itaoui.

Have a look around you right now. What if I told you I could make you feel uneasy, perhaps even scared for your safety, with a few simple text messages. Would you believe me? Rhonda Itaoui says if you are young and Muslim, then claims of Islamic terrorism in social media will affect how you navigate the city. Rhonda is a part of the new Muslim vanguard in Sydney, young Muslims who are researching and speaking up against Islamophobia in Australian cities. Listen to Rhonda's anti-racism research on SoundMinds Radio here:

Rhonda Itaoui is a PhD candidate, member of the Challenging Racism Project and sessional academic at Western Sydney University's School of Social Sciences and Psychology. Rhonda's PhD investigates the geographical links between Islamophobia and the way young Muslims use the public spaces of 'Western cities', such as Sydney and the San Francisco Bay Area. In 2015 she received a Endeavour Postgraduate Scholarship for this work. Her previous research has shown how Islamophobia negatively impacts the way young Muslims in Sydney engage in social and recreational spaces across the city. 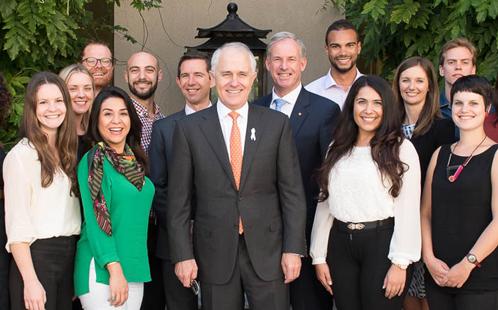 The special programme was held for Endeavour Scholarship recipients preparing to travel overseas to further develop their research projects.

Under the scholarship, Ms Itaoui will be based at the University of California, Berkeley in San Francisco in America to expand her research project examining how experiences of Islamophobia impact the way Muslim youth use public spaces.

"The endeavour scholarship will allow me to connect and compare the way experiences of Islamophobia affect the mobility of young Muslims living in Sydney, as well as the San Francisco Bay Area," says Ms Itaoui.

"I will be collecting around 300 web-based surveys and 40 interviews from Sydney and San Francisco to understand how Muslim youth experience Islamophobia."

"By undertaking a comparison of the two cities, the research can encourage place-based policy practice, public campaigns and initiatives that alleviate the negative impacts of racism."

Funded by the Federal Government, Endeavour Scholarships and Fellowships are internationally competitive, merit-based scholarships that support citizens around the world to undertake study, research and professional development in Australia, and for Australians to do the same overseas.