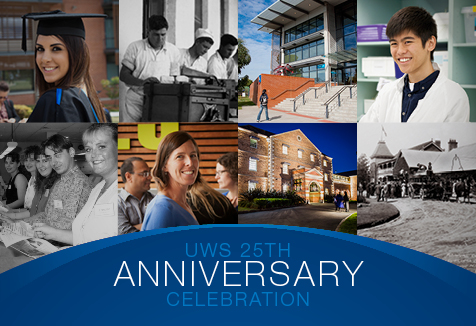 It's time to celebrate! This year, UWS turns 25 – that's a quarter of a century that the University has been "bringing knowledge to life" in the Greater Western Sydney region.

To commemorate this milestone, there will be a number of events on campus that staff, students and the community can join in. From fairs and exhibitions to public lectures and trivia competitions, there's sure to be something that interests you.

While the University's 25th anniversary officially kicked off on Thursday 20 March on the Hawkesbury campus, there are plenty of events still to come, including the Autumn Fair and Concert (opens in a new window) on Parramatta campus on Saturday 29 March. During the day, from 11am to 3pm, bring your friends and family along to the Autumn Fair and join the fun – there will be jumping castles, carnival games, a petting zoo, live music, a photo booth, spray tattoos, games on the oval, three free exhibitions, tours of the historic and newly restored Female Orphan School, and animals from Featherdale Wildlife Park. After the fair, head to the courtyard of the Female Orphan School to relax with a concert event at 6pm. Creative Producer Wayne Harrison AM will be directing a specially written concert. Tickets are free, but you will need to book – call 8839 3399 or visit the Riverside Theatres website (opens in a new window).

Penrith campus will also be hosting a seminar (opens in a new window) with Tom Hajdu on Thursday 3 April, from 1pm to 2pm at the Playhouse Theatre, Kingswood.

If you're interested in finding out more about the history of UWS, head to the UWS 25 Years webpage (opens in a new window) where you can read more on the milestones of the University and find out more about some of the people who helped to establish and shape the University.

The Records and Archives Management Services (RAMS) team has also set up a 25 Years in 25 Weeks (opens in a new window) section, where you'll find an interesting snippet each week for 25 weeks.

You are also welcome to share your story (opens in a new window) – perhaps you have a memory of a place, person, program or event that illustrates the history of UWS that can be contributed to the University's 'Living Memory' portal. Need some inspiration? Read some of the stories others have shared on the Your Stories webpage (opens in a new window).

You can also celebrate the 25-year history with some commemorative merchandise, available at The University Store. Head in-store or purchase online (opens in a new window). You can also purchase a limited edition Karma Kup at your closest UWS Food outlet.

To find out more about the events happening on your campus as part of the UWS 25th Anniversary celebrations, visit the UWS 25 Years events webpage (opens in a new window).