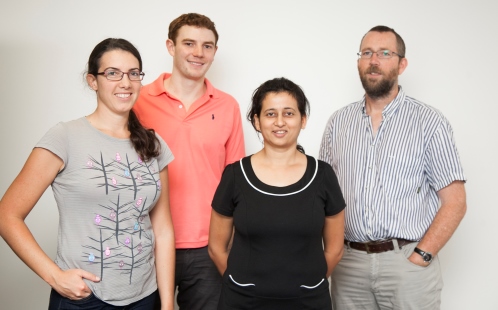 Some students working out algebraic equations back in high school may have pondered when they would ever use it in their everyday lives – but not Andrew Francis.

A Professor from the Centre for Research in Mathematics (CRM) within the School of Computing, Engineering and Mathematics, Andrew has been putting algebra to work every day since 1998 and is leading an investigation into how algebra can be used to better explain evolution in bacteria.

“Mathematics is the language of science,” says Andrew. “Mathematical approaches to biological processes date back at least as far as Fibonacci eight centuries ago. A fundamental evolutionary challenge is to understand how different species are related; what sequence of changes to the molecular fundamentals of life have led to the diverse landscape of organisms that we can currently observe? To understand the relatedness of forms of life at a molecular level, one must understand the mechanisms by which evolution occurs.”

Andrew, who is working on this research with Associate Professor Volker Gebhardt, also from the CRM, has been researching algebra itself since 1994 when he started his PhD, and has been applying algebra to biological problems since 2010.
“I have also done a lot of work on mathematical biology that doesn’t directly use algebra,” he says. “For instance, I have worked quite a bit on understanding how a pathogen such as Mycobacterium tuberculosis spreads through populations while mutating and acquiring resistance to antibiotics.”

A large part of Andrew’s work is about processes. “Either how a process could work, or what systems we would expect to see if such a process was dominant,” he explains. “The latter can help us identify relationships between biological organisms.”
Andrew says that if we gain an understanding of the relationships between species, or even organisms within a species, we can learn more about the history and evolution of different traits. “We can also potentially follow how significant features such as drug resistance spread through time,” he says.

One aspect of his work that Andrew finds most interesting is that it may bring together computational algebra and theoretical biology. “It’s exciting to take something abstract and beautiful and apply it to a very different sphere of science, especially when it’s something few people have done,” says Andrew.

Andrew’s research project is titled “Algebraic algorithms for investigating the space of bacterial genomes” and is supported by an Australian Research Council Discovery Project.