The Challenging Racism Project has conducted a number of anti-racism training initiatives. These range from training workshops with Western Sydney University staff members and students, Western Sydney Wanderers football coaches and with public school students in NSW. The training focuses on understanding and identifying racism as well as evidence based strategies to counter racist incidents that take place in both public and private spheres.

For more information on the training packages the Challenging Racism Project has on offer please see the Workplace Assessments and Education Packages page.

Participants for this project were recruited amongst students, professional staff and academic staff at WSU. A pre-test questionnaire was administered and collected at the start of every bystander anti-racism workshop, which took place across four WSU campuses throughout July and August 2014. A total of 116 participants completed the pre-test questionnaire and took part in the training. Each participant was then sent copies of the materials developed for the communications campaign, launched during Diversity Week in September 2014, by mail and email. Participants were also invited to attend one or more of the culturally and linguistically diverse community dinners held at WSU in the months of November and December 2014; however, these were not compulsory and not all participants attended. Each of these strategies were organised and delivered by Equity and Diversity staff, in conjunction with other WSU departments. Following the last of the community dinners, a post-test survey questionnaire was distributed to participants by email. 54 participants completed the post-test questionnaire.

Respondents' pre-test self-reporting of how they would respond if they witnessed racism indicates that many felt that they would say or do something.

However, both of these sets of figures increased significantly at the conclusion of our training. After completing the bystander anti-racism training:

This improved capacity was also demonstrated by responses to the question, "How confident are you that you would know how to respond to an incident of racism?". Our pre-test showed that 26.7% of participants were 'not very confident' and 47.4% of participants where 'somewhat confident'. After completing our training those individuals who felt 'not very confident' dropped to 6.7% and those who felt 'somewhat confident' increased to 73.3%.This finding suggests that the bystander anti-racism strategies increased participants' confidence, skills and knowledge in responding to racism. 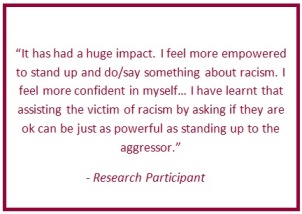 Participants' reflections on the individual strategies indicated that they felt the training workshops were the most effective in increasing knowledge, skills and confidence of bystander anti-racism action. Participants were asked to rate each strategy from 0-100, with workshops achieving a mean score of 77, the communications campaign a mean of 44 and the community dinners a mean of 47.

The majority of the participants who completed the post-test survey stated that they had gained knowledge, skills and confidence as a result of their participation in the project.

Participants' reflections on the individual strategies indicated that they felt the training workshops were the most effective in increasing knowledge, skills and confidence of bystander anti-racism action. Participants were asked to rate each strategy from 0-100, with workshops achieving a mean score of 77, the communications campaign a mean of 44 and the community dinners a mean of 47.

The majority of the participants who completed the post-test survey stated that they had gained knowledge, skills and confidence as a result of their participation in the project. When asked what impact the WSU bystander anti-racism strategies had on their confidence to take action when they witnessed racism, the answers were largely positive and indicated that the strategies had a high impact on the group. Some of the positive impacts identified included:

The findings of this project demonstrate that the bystander anti-racism strategies had a largely positive impact on participants understanding and awareness of racism, their attitudes towards racism and their confidence to respond to racism. Based on the qualitative feedback as well as the rating of individual strategies, the bystander anti-racism training workshops were the most effective in meeting these aims, with the communications campaign and community dinners being perceived by participants as being less effective to this end. Participants felt that the workshops gave them the chance to explore the concepts of racism and anti-racism in more depth in a safe and open setting, and also gave them opportunities to practice their newly learned skills through the coaching exercises.

Bystander anti-racism is emerging as an evidence-based method of targeting interpersonal and individual racism in Australia, and the training being undertaken through CRP initiatives is at the forefront of this movement. The benefits of this training are hoped to affect the WSU community and broader Australian society at large.

In December 2014, the Challenging Racism team ran a bystander anti-racism workshop with community coaches from the A-League football club Western Sydney Wanderers.  This "train the trainers" workshop was designed to:

The bystander anti-racism scripts that were developed out of the workshop have since been used by Western Sydney Wanderers' community coaches in their football clinics with children and young people. They have also been used as ground announcements as part of anti-racism campaigns Examples of the scripts included:

Our differences unite us!

Hurting others because they are different hurts us all and the team.

Wanderers take a stand when they see someone being hurt, on and off the field.

Being a Wanderer means respecting difference, at school and in the streets and parks of Sydney.

Wanderers speak up when they see racism.

The workshop was also followed by the Western Sydney University hosting key anti-racism researchers and officers and CEO's of key anti-racism agencies at the A-League Harmony Round Match at Parramatta Stadium. Delegates discussed this important issue as well as collaboration opportunities.

Students were provided a safe space to reflect and share their own stories. Students were also given the opportunity to participate in interactive activities to understand the benefits of and approaches to bystander anti-racism. The workshop led to further development of skits and stories which the students shared with their school community by creating story books. Participating students were encouraged to share their knowledge and experiences with younger students to foster a positive approach to diversity and anti- racism.