The search to end chronic pain 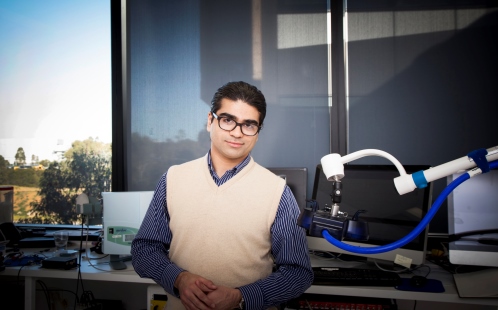 Caption: Saad Nagi in the Pain Physiology Lab at the School of Medicine.

Imagine living with chronic pain; the type of pain that rarely leaves you. To find respite from this would be life-changing for most sufferers and Saad Nagi, from the School of Medicine, has made it his work over the past six years to seek out a way to relieve chronic pain. Recently, Saad was awarded a 2014 International Association for the Study of Pain (IASP) Early Career Research Grant for 2014-2015.

Saad says he is fascinated by the workings of the human brain and was inspired to research pain by his mentor, who was investigating bone pain in animal models. "Pain research generally has immense implications given the millions of people worldwide who suffer from and live with chronic pain (as well as the uphill struggle of their carers)," says Saad. "In retrospect, I think this 'human' aspect, at least at some level, also prompted me to research pain after having observed first-hand how pain affects the lives of individuals and their families."

Saad commenced his UWS journey in 2005 as an international student studying medical science. After receiving Honours with First Class, PhD with Category 'A' Recommendations, and receiving the UWS Medal for Outstanding Scholarship, Saad is now working as a full-time Postdoctoral Fellow in Dr David Mahns' research group at the School of Medicine.

Saad believes the outcomes of his research will contribute to finding effective treatments for chronic pain. Recently, he has been focused on sensitive nerves called C-tactile fibres. C-tactile fibres have been thought to play a role in pleasant touch associated with skin-to-skin contact between individuals, and, by implication, have been hypothesised to contribute to pain relief. However, Saad's research has provided the first evidence that C-tactile fibres play a role in the generation of mechanical allodynia (pain or burning sensation in response to light touching) in healthy humans in experimental models of deep body pain. More recently, his research has found that the allodynic role of this nerve class extends to various experimental pain types, skin regions and body domains.

"These findings contribute to our understanding of pathophysiology underlying various pain conditions, and may eventually result in the development of drugs and pain therapies that will treat the actual source rather than the symptoms of pain," explains Saad.

Next, Saad will be looking into patients with chronic pain, seeking to form partnerships with pain clinicians.