Immersive cinema and science a hit at the World Economic Forum 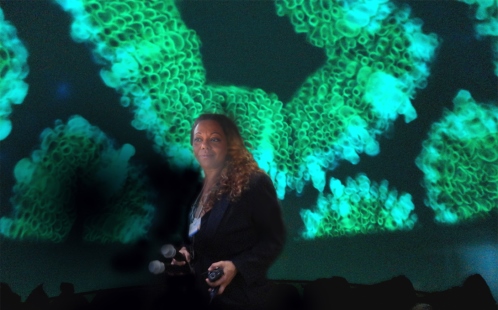 Corals play a very important role in the life of underwater ecosystems – and since many are brightly fluorescent, intricately patterned with glowing neon colours, they are perfect subjects for combining science and art. Dr Anya Salih from the Office of the Deputy Vice-Chancellor (Research and Development), a scientist who has researched the reason why coral glows in the dark, has collaborated with internationally renowned artist Lynette Wallworth to help connect people to the plight of coral reefs through film.

In September, Anya and Lynette travelled to China where they presented at The World Economic Forum (opens in a new window). This forum sees the gathering of those with interests in innovation, entrepreneurship, science and technology and is attended by around 1500 leaders in business, government, media, academia and more.

Lynette and Anya's presentation is out of the ordinary. Lynette's documentary titled Coral: Rekindling Venus (opens in a new window) was played inside a dome on a 360-degree screen to show viewers the colourful world of our fragile coral reefs and the eerily beautiful fluorescent corals. Anya assisted with the film's creation as Chief Scientific Advisor, and filmed some of the fluorescent corals using instruments at the UWS Confocal Bioimaging Facility. At the Forum, Anya gave insights to viewers into the threat of climate change to the survival of coral reefs, highlighting the urgency and need for action. Anya's new research into biotechnological applications of coral fluorescence, in bioimaging of cellular events and in cancer, super-resolution microscopy and solar energy, created real excitement from the audiences.

Word swiftly made its way around the summit that the presentation was not to be missed. It was so popular that Anya and Lynette ran six to eight sessions each day.

"Long queues of people started forming 40 minutes before the sessions because word had spread and everyone wanted to take part," says Anya. "The Iranian minister for Trade woke up early on the last day of the Forum to be at the head of the queue so he wouldn't miss out on the experience. Mr Khalid Al Falih, President of Saudi Arabian oil company Aramco, and one of the founders of King Abdullah University of Science and Technology (KAUST), said that he never knew that reefs were so beautiful before seeing Coral: Rekindling Venus and felt deeply touched by the work and excited by the science. For the first time, we felt that we could truly reach with our message those with the power to help."

The presentation made such an impact that one of China's most famous actresses and singers, Zhou Xun, heard about it and arrived at the Forum to view it. "Zhou has 76 million Weebo and Twitter followers," says Anya. "She is also the Laureate of United Nations Environment Program Champions of the Earth and her support for the film and program would encourage millions of her followers to take note of the environmental concerns faced by reefs. So we had a special viewing for her with security closing down part of the Forum temporarily."

Many people who attended the presentation felt compelled to help. "People came up to us after leaving the dome, overcome with emotion, saying they didn't know the coral world was so beautiful and wanted to help save reefs," says Anya.

Anya also had several discussions and meetings with scientists, company CEOs, entrepreneurs and ministers. One such meeting was with Hakubun Shimomura, Japanese Minister of Education, Culture, Sports, Science and Technology, who is also in charge of Tokyo's 2016 Olympic and Paralympic Games, and his advisers. Plans were discussed to establish future research collaborations with Japanese scientists as well as to promote Coral: Rekindling Venus and associated initiatives in Japan, especially as part of the 2016 Olympics cultural program. Anya also met with Mr Nishan Degnarian, Chairman World Economic Forum Global Agenda Council on Oceans and representative of the Ministry and Finance Economic Development Office of the Mauritius Republic, and discussed strategies on how the Forum's experience of Coral: Rekindling Venus could be shared onward through the work of the World Economic Forum Oceans Council. In September, the Australian Foreign Minister visited Mauritius (as Chair of the Indian Ocean Rim Association) to discuss shared interests in the ocean economies of the Indian Ocean and there is potential for further collaborative opportunities and initiatives.

Tying together the unique combination of art and science to communicate climate change dangers to coral reefs and coral science was an effective combination perfectly suited to the World Economic Forum, which aims to assist with building partnerships between scientists, innovators and businesses to achieve results.