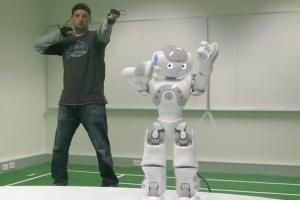 Dr Anton Bogdanovych from the UWS School of Computing, Engineering and Mathematics together with Chris Stanton and Edward Ratanasena from the Innovation and Enterprise Research Laboratory at the University of Technology, Sydney have created a prototype demonstration of a remote controlled humanoid Nao robot using a full-body motion capture suit.

Watch a video of the project

With this technology a human can tele-operate (via remote control) a robot by wearing a full-body inertial motion capture suit (this is the kind of equipment James Cameron employed for animating 3D models of alien Na’vi creatures in the movie Avatar).

The suit consists of 17 sensors. Each sensor is located close to the corresponding joint of the human body and can capture position changes and rotations of those joints. In a way each of those sensors works similar to an iPhone – in that they can detect their own orientation in space – but this equipment is much more accurate and can detect very small movements with millimetre precision. Knowing the orientation of each human joint it becomes possible to create a mapping between the human joint orientation and rotation of the corresponding robot motors.

Anton says apart from mapping the motion capture data to robot motors the biggest problem the team faced was to overcome embodiment dissimilarity.

‘Robot joints are very different from human joints – they have a very different range of motion. There are fewer joints on the robot with much less motion flexibility and the centre of gravity is different,’ says Anton.

‘Overcoming these embodiment/balance dissimilarities is what we spent most of our research efforts on. We managed to create accurate real-time mapping between most human joints and the corresponding robot motors, while also ensuring that the robot can maintain its balance when mimicking a human.

‘The commercial potential for this technology is in high-risk environments or disaster recovery situations – pretty much all those places where it's too dangerous to send humans,’ says Anton.

‘The robotic hardware technology still has a fair way to go until it becomes technologically feasible to deploy something like this on a large scale, but all the software building blocks for it are already in place.’