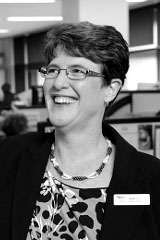 Distinguished Professor in Nursing, School of Nursing and Midwifery

Originally trained as a registered nurse at the then Lidcombe Hospital, Lynn commenced her academic career in 2002 with a commitment to improving health equity for vulnerable groups, focussed on the critical early years of life.  The Maternal Early Childhood Sustained Home-visiting (MECSH) program Lynn developed in south-western Sydney has received USA government approval as an effective, evidence-based sustained home visiting intervention. MECSH is now implemented in Australia, the UK, USA and South Korea, currently serving more than 15,000 families world-wide. Significantly, in South Korea, her work has been instrumental in the establishment of a universal child and family health service system, serving the city’s 10million residents, where previously families had no access to such support.

Lynn’s work is leading translation of research findings into population-scale programs. Through the MECSH programs nurses working with families have, as described by one nurse, "a great opportunity to facilitate some changes, empower families to find a way forward that might be different from their past." Her skill in supporting population scale implementation is now also informing strategies for improved adoption of effective cancer and volunteer interventions. Lynn is an academic leader graduating 11 PhD students in the past 5 years, and an honorary fellow at Kings College London.