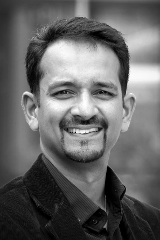 Professor, School of Nursing and Midwifery

Dr Ajesh George (BDS, MPH, PhD) is a Professor at the School of Nursing and Midwifery, Western Sydney University (WSU) and Honorary Associate Professor in the School of Dentistry at The University of Sydney and La Trobe University. He is a Dentist with extensive experience in interdisciplinary oral health care and is a leading expert in Australia in providing oral health training to nurses/midwives and translating oral health guidelines into their practice.

Dr George is also the Director and Co-founder of the "Centre for Oral Health Outcomes & Research Translation" (COHORT) (opens in a new window) which is an innovative partnership between WSU School of Nursing & Midwifery and South Western Sydney Local Health District (SWSLHD) Oral Health Services bringing together Dentists and broader health workforce for the first time in Australia. He is also the co-founder and executive member of the Australian Network for Integration of Oral Health (NIOH) (opens in a new window) and the Co-Director of The Australian Centre for Integration of Oral Health (ACIOH).

Since his PhD Dr George has been initiating and leading multidisciplinary teams in developing and implementing innovative models of oral health involving non-dental professionals care across the lifespan and chronic conditions (maternity, paediatrics, aboriginal health, cardiovascular disease, diabetes, stroke, intellectual disability and palliative care).  His work has led to the development of Australia’s first midwifery initiated oral health (MIOH) program which has been recognised nationally and internationally. He has also been instrumental in training nurses and midwives to promote oral health by integrating oral health into undergraduate midwifery and nursing courses at Western Sydney University as well as developing nationally recognised oral health professional development training programs.

Prof George also has a significant track record of translating research into policy and practice and his work has been endorsed and recognised by the World Health Organisation. The MIOH program has been successfully implemented in various hospitals in NSW/Victoria and included in Victoria’s Oral Health Promotion Strategic Plan and Obstetric Monitoring system. In addition, the MIOH training package is endorsed by Australian College of Midwives as a professional development program nationally, the MIOH oral health promotional resources are being distributed state-wide by NSW Ministry of Health and oral health has been successfully implemented in the nursing and midwifery curriculum at Western Sydney University- another first in Australia. The MIOH program has received attention through media and television including ministerial media releases, newspapers and Channel 10 news.