Growing up in the Blue Mountains, Dr Paul Rymer was inspired by nature and the capacity for plants to not only cope with major disasters (e.g. wildfires and drought), but thrive in their wake with an amazing diversity of forms and functions.

He went on to do a BSc majoring in Environmental Science at the University of Western Sydney, Hawkesbury. His Honours research project, supervised by Charles Morris and Barry Richardson, investigated the reproductive biology and population genetics of a rare, Cumberland Plain plant, Dillwynia teniufolia (Fabaceae).

After submitting his PhD thesis, he went to the UK for four years to obtain some postdoctoral experience in different research groups. At the University of Oxford, he investigated historical and recent population structure in neutral and coding genetic loci and mating patterns in fragmented landscapes for neotropical trees as a post-doctoral researcher on a large EU project (SEEDSOURCE).

He also worked with John Pannell at Oxford on Mercurialis annua (Euphorbiaceae) a sexually variable ruderal weed developing co-dominant SSR markers for this allohexaploid system. He also obtained a Marie Curie Incoming International Fellowship to work with Vincent Savolainen at RBG Kew & Imperial College London to explore the role of pollinators in the diversification of flowering plants in southern Africa, focusing on the Iridaceae plant family.

This research project had three broad levels of investigation (1) macroevolution of floral characters in the genus Sparaxis, (2) population differentiation (a) parapatric pollinator and habitat shifts in the Gladiolus carinatus species complex (b) Gladiolus longicollis allopatric floral divergence and reinforcement in zone of secondary contract, and (3) assortative mating among morphs: a paternity analysis in a natural hybrid zone.

He returned to Australia to work as a postdoctoral researcher in the Section Evolutionary Ecology at The Royal Botanic Gardens Sydney with three major lines of research:

He is currently a Research Lecturer in Environmental Genomics, Hawkesbury Institute for the Environment at Western Sydney University. Paul is also a Honorary Research Associate at The Botanic Gardens Trust.

Paul combines classical and novel ecological and molecular techniques to address outstanding questions in evolutionary ecology. His research focuses on the ecology and evolution of organisms in natural populations, in particular plant-animal interactions, mating patterns, hybridisation and local adaptation, and how these factors drive and erode species diversity. His research is applied to understanding the origin of biodiversity hotspots, the evolution of invasiveness, and adaptation to climate change.

There is an urgent need to move beyond the individual planting of container stock at restoration sites which is labour intensive and costly, and instead use direct seeding methods to populate sites. This approach has been successfully shown at field scales in re-establishing complex combinations of species that establish and persist successfully over time.

This project is working towards this goal by providing knowledge of Seed Production methods and how seed mixes can be reintroduced to sites through restoration.

Investigating psyllids that are defoliating and killing Grey Box eucalypts on the Cumberland Plain in Western Sydney. The project, which has been assisted by the New South Wales Government through its Environmental Trust and in partnership with the Royal Botanic Gardens and Domain Trust, aims to develop measures to try to conserve this once dominant tree species.

Capacity to respond to climate change

This ambitious project will develop next-generation sequencing approaches for biodiversity assessment in changing environments. Plant community plots along a steep environmental gradient traversing major bioregions from Sydney across the Blue Mountains to the Western Plains will be characterised and sequenced. Ecological and phylogenetic analyses will be utilised to determine the role of dispersal, environmental selection, plant competition and pathogen loads on species distribution patterns and co-existence.

Understanding the capacity of species in natural populations to respond to changing environmental conditions is of critical importance to conservation managers, ecologists, and evolutionary biologists. Plant functional groups are likely to respond differentially to the same environmental conditions – explaining distributional patterns – however the relative adaptive and plastic response is largely unknown.

Much work has been carried out on Telopea speciosissima (NSW Waratah).

Testing "Darwin's naturalization hypothesis" that introduced plant species are more likely to become invasive in the absence of closely related species in the native flora. This study focuses on Australian and New Zealand Senecio species (Asteraceae) where recent taxonomic (Thompson 2006) and phylogenetic (Pelser etal 2007) studies provide the framework for the development of a robust species-level phylogeny. Stages of the invasion, time since introduction, spatial scales, and ecological traits will be investigated to obtain an understanding of the conditions for introduced species to become invasive.

Introduced species are a major threat to global biodiversity. They also represent an excellent experimental system for studying the response to novel environments and evolution in action. We will address the following fundamental evolutionary questions:

Our innovative approach combines ecological and physiological experiments with population transcriptomics, utilising next-generation sequencing, to understand evolutionary processes. It will determine the source of invasiveness genes associated with the evolution of phenotypic plasticity and adaptive divergence.

Species are not distributed evenly across the globe – creating areas with high and low diversity – as seen in the reduction in species diversity from the tropics to the poles. Mediterranean biodiversity hotspots buck this trend, indicating other processes are in play. The Western Cape of South Africa and South Western Australian represent excellent comparative systems with similar evolutionary histories, climates, geography and high levels of plant diversity. Using a combination of phylogenetic and population genetic approaches this project aims to determine the drivers of this amazing diversity. 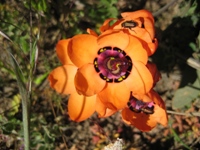 My work in the Western cape explored diversification in the Iridaceae.

Species occurring in the same geographic and environmental conditions will tend to converge on the similar optimal phenotypes given stable conditions and enough time. This line of research aims at understanding the convergence of traits in disparate lineages and the role plant interactions play. Case studies under investigation (i) hawkmoth pollination in sub-Saharan Africa (ii) Geographic floral colour convergence in the Iridaceae (iii) leaf spot fungi with Eucalyptus and Proteaceae hosts. A array of approaches are being applied – from spatial modelling, ecological experiments, population genetics to phylogenetic analyses – to gain an understanding of the mechanisms involved in genetic and trait convergence.

Hawkmoth pollination provides a direct association of traits with fitness.

Honours and PhD research projects are available for qualified and enthusiastic students. Feel free to approach me if you are interested in pursuing research in any of the areas listed above. Post-doctoral research candidates are invited to contact me with regard to potential research projects.