With input from Daniel Curran, University of Kent.

This project is based on analysis of linguistic data I collected on Palmerston Island, a small, isolated island in the Cook Islands group. Palmerston was settled in the 1860s by a small group of Polynesian settlers and the English sailor William Marsters and is inhabited today by the 54 descendants of this group. The islanders are monolingual speakers of their own dialect of English, which has a number of non-standard features. There is also a large amount of variation in how the islanders speak, both in terms of pronunciation and grammar. My more general publications about Palmerston English are linked below.

In 2010 a then-PhD student from the University of Kent, Daniel Curran, collected social network data on Palmerston Island during an ethnographic fieldtrip. By examining this social network data to understand the relationships within the community and the connections the community members have to outsiders, we can gain a better understanding of why we find the patterns of linguistic variation that we do. We can also use this information to construct models for how linguistic change moves through the community, for example the roles of people's connection to the church and school and the linguistic influence of these major institutions. 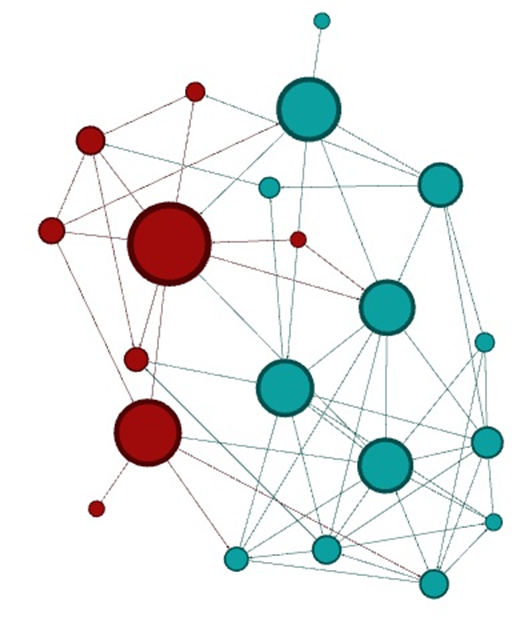 Palmerston Island social network with automatic community detection (Louvain method) correctly identifying almost all islanders as part of the social group they also self-identify as belonging to (bush vs beach).