Mama and Papa in Indigenous Australia

Anthropologists and linguists have explained the high frequency of words like mama and paparespectively for 'mother' and 'father' around the world as spontaneously recurring inventions, in the case of 'mama' related to sounds made by an infant while breast-feeding. This type of explanation has tended to make linguists generally suspicious of finding deep etymologies for such words or reconstructing them to proto-languages.  At the other extreme there are linguists of the 'long-range comparison' school who believe that they can reconstruct a number of 'proto-world' or 'proto-Sapiens' kinship terms, and include *mama and *papa among this set.

As a corrective to both these approaches we closely examined the kinship roots mama and papa, which are widespread in Australian Indigenous languages. In investigating the distribution and varying meanings of these roots we used the on-line database of Australian kinship terms, AustKin, which was been being compiled as part of an ARC Discovery Grant based at the Australian National University.

Contrary to some versions of both the 'baby talk' and 'proto-world' approaches, mama in Australia is mostly found as 'father', not 'mother', and papa is found as 'mother' in some areas. Mama is a possible candidate for Proto Pama-Nyungan 'father'. Its distribution is mainly in the west of the continent and in Victoria, and in central and northern New South Wales in the meaning 'father'. In the north of Western Australia, it shifts meaning to 'elder brother'and in other places there are shifts of meaning to be discussed below. Elsewhere versions of papa are found sporadically for 'father' and also for '(elder) brother'. Pap(a) is also found as 'mother', mainly in Victoria. Other kinship roots (for grandparents) have been shown to have a split distribution with one root dominating in the east and one in the west for what is apparently a single proto-meaning. The distribution of mama and papa is not so clear-cut, but we outline how it can be accounted for without resorting either to recurrent invention or inheritance from some putative proto-world ancestral language. 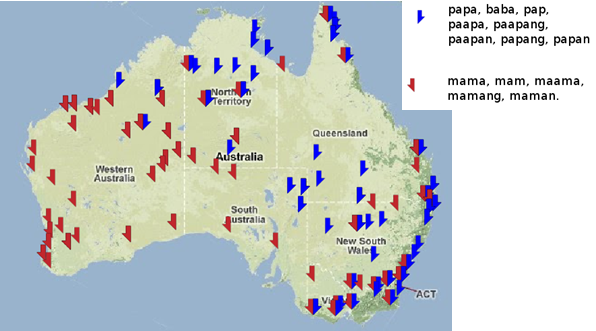