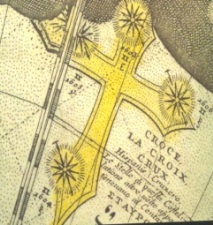 The Southern Cross is one of the most famous constellations in the southern hemisphere. It appears in one form or another on the national flags of Australia, New Zealand, Western Samoa and New Guinea. It was first observed by European explorers and adventurers in the 16th century. In fact, Andrea Corsali (n.d.) a Florentine traveler who sailed with a Portuguese expedition to Goa in India in 1515, described a distinctive constellation of stars as a cross. For him it had a resonance with his Christian culture – the cross on which Jesus Christ died for his fellow human beings. It was variously named on maps as 'cross', 'crosiers', 'crucero' or 'crux'.

In her book Stradbroke Dreamtime, the well known Aboriginal poet and Aboriginal rights campaigner Oodgeroo Noonuccal (Kath Walker, 1972) gives us an account of how the Southern Cross came into being. It is based on the stories she heard when she was growing up with her Aboriginal family on Stradbroke Island off the coast of Queensland. Biame, the Good Spirit was extremely busy keeping an eye on the Aboriginal people but found he could not watch them all the time. He decided that he needed the assistance of someone to help him in his guardianship of his people. He chose a man named Mirrabooka who was not only loved by everyone but also looked after the welfare of his people. So, according to Noonuccal, 'Biame gave him a spirit form and placed him in the sky among the stars, and promised him eternal life. Biame gave Mirrabooka lights for his hands and feet and stretched him across the sky, so that he could watch for ever over the tribes he loved. And the tribes could look up to him from the Earth and see the stars which were Mirrabooka's eyes gazing down on them'. However, she says when the 'white invaders came from across the sea and stole the tribal lands, they did not know that this group of stars across the southern sky was Mirrabooka, and they renamed them. They called Mirrabooka by the name of the Southern Cross'. They not only took their lands but also stole their stars. So it came to pass that the invaders who came to take over Australia in the names of their Kings and Queens not only stole their sky heritage but also their land and in the process according to well known historian Henry Reynolds (1982), 'Twenty thousand blacks were killed before federation'. Except for the 'Memorial' exhibit at the National Gallery of Australia there are no monuments in the capital cities or country towns or parks in Australia with the three simple words emblazoned on them to say 'Lest We Forget' to remember these dead Aboriginal men, women and children who had lost their lives in defending their motherland

Note: There are other views on the history of Aboriginal society and culture. Please visit the University of Western Sydney Library (opens in a new window).

In his most recent documentary UTOPIA shown on SBS and at Campbelltown (Cinemas Macarthur Square), well known film-maker and journalist John Pilger "uncovers the truth about Australia's treatment of its first inhabitants".

Note: There are other views about Aboriginal society and culture. Please visit the University of Western Sydney Library (opens in a new window).