The space between the stars is not empty. It contains interstellar material which is composed of cold, dark clouds of gas and microscopic dust particles. These dark clouds of gas and dust are called nebulae and are scattered abundantly throughout our Galaxy. They are easily visible to the naked eye. These dark spaces were observed by the Aboriginal people a long, long time ago. When you go to the country side they will tell you stories about them.

In the dark spaces of the Milky Way the Aborigines see the shape of an emu. The emu is reflected in rock engravings on the ground. So it is not surprising to learn from Mowaljarlai, 'Everything under Creation is represented in the soil and in the stars. Everything has two witnesses, one on earth and one in the sky. You can't get away from it, because all is one, and we're in it. As you see the Milky Way, it ties up the land like a belt, right across' (Mowaljarlai and Malnic, 2001). 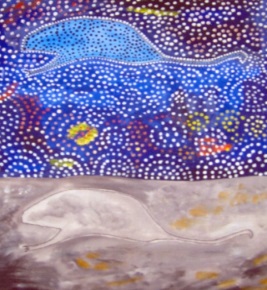 Emu in the sky and on the land. Private Collection.

One of the finest engravings of the emu is to be found at Ku-ring-gai Chase National Park in Sydney. It has been known to the Aboriginal people for thousands of years and the stories have been carried along songlines. It has spiritual significance to them. According to Daisy Bates (1923), 'The kallaia or emu must be given first place for it is the only black constellation in the heavens…In the dhoogoor or dream times of long ago the emu constellation played a most important and most sacred part in the curriculum of the young initiates or the kallaia dhoogoor waddi (emu totem men) of Central Australia. The heavenly kallaia was their religious symbol, and every ceremony and song and myth connected with it was performed and sung and related to the young Oolberu (novices) during the days and nights of their long novitiates. With every performance the sacredness of their symbol was enhanced, so that when the trying period of initiation had been gone through and they had become fully developed waddi (men), the mystic religiosity attached to their spirit totem remained with them and increased in intensity with their years, until finally when their time came to die, they once more lifted their eyes to their sacred emblem (on which they had not dared to look throughout all the years of their manhood and old age) and passed quietly and tranquilly away under its shadow'.

Basedow (1925) gives us another perspective of this land/sky emu. According to him, 'I ascertained that the black-looking gap in the Milky Way, close to the Southern Cross, which is commonly known as the Coal Sack, was referred to as Kaleya Pubanye, that is the Resting Emu. In the north of Adelaide, the Larrekiya, Wogait, and other tribes have adopted a similar designation for a series of dark spaces along the Milky Way. But they have extended the idea considerably in that the Coal Sack represents the head of a gigantic emu, the beak of which is pointed towards the Musca constellation (i.e. towards the south). A small star of the Southern Cross group very appropriately stands for the eye of the bird; the nebulous effect usually surrounding this star gives it an extra life-like appearance. The neck is but faintly discernible near the head, but becomes clearly visible in the neighborhood of the nearer Pointer; it passes between the two Pointers and curves slightly towards the constellation of Lupus. Within the constellation of Norma, the dark space widens considerably and represents the body of the emu. The blunt tail turns sharply towards, and into the constellation of Scorpio. A nebulous patch lying practically on the point of the junction between the imaginary areas of Ara, Scorpio and Norma affords a good division between the legs of the bird, while another lying between μ and ξ of the Scorpio group separates the tail. The two lower portions of the legs are not very clear, but some of the more imaginative natives maintain that they can distinguish three toes on each extremity. There is no doubt the primitive eye has herein discovered a striking similarity between an optical phenomenon in the southern sky and a living creature, which is of great importance in the hunting field, and at the same time plays a prominent role in tribal folklore. They refer to this emu by the name of Dangorra'.

Note: The great English physicist, Isaac Newton arrived at the same conclusion that the laws on the land are the same as those in the heavens in the 17th century. He incorporated this in his theory of universal gravitation which is taught to physics and engineering students in universities around the world. However, unlike the Aboriginal people he stated it in mathematical terms, F = G (m_1 m_2)/r^2 .

The concept that the law of the land is the same as the law of the heavens was used very effectively to win the Mabo case (Keon-Cohen, 2013; Young et al 2010)