The World That Feels Warm 有温度的世界

The World That Feels Warm有温度的世界 is an exhibition exploring the harmony between art, nature and humankind. The Institute for Australian and Chinese Arts and Culture has been engaged by Willoughby City Council to produce this exhibition at the Incinerator Art Space of Willoughby as part of the Chatswood Year of the Tiger Festival. Curated by internationally renowned Chinese-Australian artist Guan Wei, The World That Feels Warm features a diverse range of visual arts practices, from painting, photography and sculpture to installation-based work and video art by the highly esteemed artists Tracey Moffatt, Tim Johnson, Owen Leong and newly emerged artists Jingzhe Li and Huajie Zhang. Under the theme that “human beings and nature are one 天人合一”, this group of artists inspire passion and strength through their work to ease and heal the trauma brought by the global pandemic.

Guan Wei graduated from the Department of Fine Arts at Beijing Capital University in 1986. From 1989 to1992, he completed art residencies at the University of Tasmania, Australian National University and Museum of Contemporary Art in Sydney. In1993, he immigrated to Australia. In 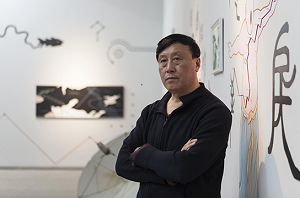 2008, Guan Wei set up a studio in Beijing. He now lives and works in Beijing and Sydney.Guan Wei has held more then 70 solo exhibitions in Australia and internationally, and has been included in many important international contemporary exhibitions, such as the Shanghai Biennial, China; the 10th Havana Biennial, Cuba; the Adelaide Biennial of Australian Art, Australia; the 3rd Asia Pacific Triennial of Contemporary Art, Australia; the Osaka Triennial, Japan; and the Gwangju Biennial, South Korea. He has been awarded in many art competitions, including: 2002 Sulman Prize at Art Gallery of NSW; 2015 Arthur Guy Memorial Prize, and Bendigo Art Gallery in Victoria.

Guan Wei’s work has a profoundly felt, if implicitly ironic, moral dimension. In their complex symbolic form, his subjects potently embody current social and environmental dilemmas. They are equally the product of his rich cultural repertory of symbols and his informed socio-political awareness and art-historical knowledge.

Cultural Cartography: Creating Art at the Intersection of Cultures

German physicist Werner Heisenberg, one of the key pioneers of quantum mechanics, states in his influential book Physics and Philosophy that “in the history of human thinking the most fruitful developments frequently take place at those points where two different lines of thought meet. These lines may have their roots in quite different parts of human culture, in different times or different cultural environments or different religious traditions”. A similar remark was made by the late Australian art critic Robert Hughes, who observed that some of the most interesting phenomena in history and arts have occurred at the intersection of cultures.

It is interesting to note that one statement is made in the field of science, and the other in the arts. Both Heisenberg and Hughes arrived at the same conclusion that new creation and innovation often happen at the intersection of two or more different thoughts and cultures.

In the last twenty years or so, this intersection of different cultures has become a critical base for cultural creation and innovation in multicultural Australia, as particularly demonstrated in the artistic expressions of second generation artists of Chinese and Asian heritage. While they grew up and have been educated in mainstream Western culture, these artists have also learnt and have been greatly influenced by their cultural heritage. From the vantage point of seeing both cultures from their individual perspectives, they have the knowledge, capability and confidence to bring out some of the most interesting or distinctive parts from both cultures and integrate them into their own unique artistic creations and styles.

This second generation of artists focus on the diversity, complexity and dynamics of contemporary humanities and lifestyles. Their artworks reflect their strong interest in and sharp thoughts of the present-day human conditions, expressing their concerns, anxieties, pain, joy and pleasure of the world they are living in. In the meantime, they have achieved a unique infusion of the two cultures they grew up with, articulated in a great variety of artistic media and genres. They have many things in common including their passion for and commitment to innovative expressions. Yet they are also clearly marked by their individual styles and pursuits.