Award-winning multimedia artist Dr Tianli Zu’s solo exhibition Shadow World is currently showing at Institute for Australian and Chinese Arts and Culture (IAC) at Western Sydney University on Parramatta South campus. As a part of the exhibition, the artist will hold a hands-on papercutting workshop at IAC, to also celebrate The Moon Festival.

Guiding you through how to fold, cut and create, Zu will explain the symbolic meaning behind the patterns and take you on a journey to make art in the style of freehand cut through traditional Chinese papercutting technique.

This workshop will offer a fun, creative and relaxing experience to explore storytelling with paper cuts. Participants will take home a series of their own creation. The workshop is sponsored by Western Creative of Western Sydney University.

No prior experience is necessary. Materials will be provided.

Participation is free and by registration only. Numbers are limited.

Zu continues her exploration of light/shadow, east/west, and handmade/technology to comment on environmental emergencies. She creates new myths combining ancient Chinese folklore with contemporary interpretations. Zu titles the new body of works Shadow World and defines it as a yin element in Chinese terms – taiyin 太陰 (‘the Moon’). It manifests Mother Nature’s forgiveness, beauty, regenerative powers, and letting it go.

MUSIC In the light of a shadow by Dr Nicholas Ng, performed by Ying Liu and Dora Maria

*Registration is free but essential

By Professor Jing Han, Director of IAC at WSU

The Institute for Australian and Chinese Arts and Culture (IAC) at Western Sydney University is greatly honoured by the privilege of holding this distinctive and inspiring solo exhibition, Shadow World, by iconic Chinese Australian multimedia artist Dr Tianli Zu. Zu has achieved outstanding success in her artistic practice of over 30 years. Informed by scholarly research, her work has made distinctive contributions to Australian contemporary art through her unique and thought-provoking exploration of intersectionality between east and west, ancient and contemporary, nature and technology, and light and shadow.

WSU is committed to sustainability and climate action and has achieved a ranking of the world No. 1 in the 2022 Times Higher Education Impact Rankings, based on the United Nations Sustainable Development Goals (SDGs). Western Sydney being the fastest growing economy in the country and with many new monumental infrastructure in the planning, environmental sustainability and resilience are becoming more urgent than ever. Shadow World shows Zu’s new body of works specifically created to convey the artist’s deep reflection on environmental emergencies, her belief in power of nature and intimate interactions with nature. Zu’s highly intellectual and artistic pursuit of environmental sustainability and interpretations of ancient Chinese folklore in the context of contemporary Australia are superbly expressed in her combination of transformational presentation of centuries-old papercut traditions with contemporary conceptual art creation and installation. The viewing experience in this immersive exhibition is far-reaching and will inspire our love for nature while instilling a sense of urgency for environmental protection.

I am a Chinese-Australian multimedia artist. My varied practice explores the complex relationships between light and shadow.

The shadow is a negative energy and a metaphor for one’s unconsciousness. It is female, receptive, nurturing, and gives birth out of darkness. The shadow possesses power by moving from dark to light spontaneously: it provokes chance that is beyond one’s control.

I learnt papercutting from Shaanxi peasants in the 1980s. Since then, I have utilised this limitless resource and worked to extend this cultural tradition to the present day. I have transformed the paper cut into contemporary large-scale installations where intricately cut scrolls are animated by light and video projections. I work directly, building up the scroll surface with layers of paint before cutting it directly by hand without sketches.

My art making process is intuitive, chance driven, deeply personal, but abstract. The cutout is a way through which I communicate with people. 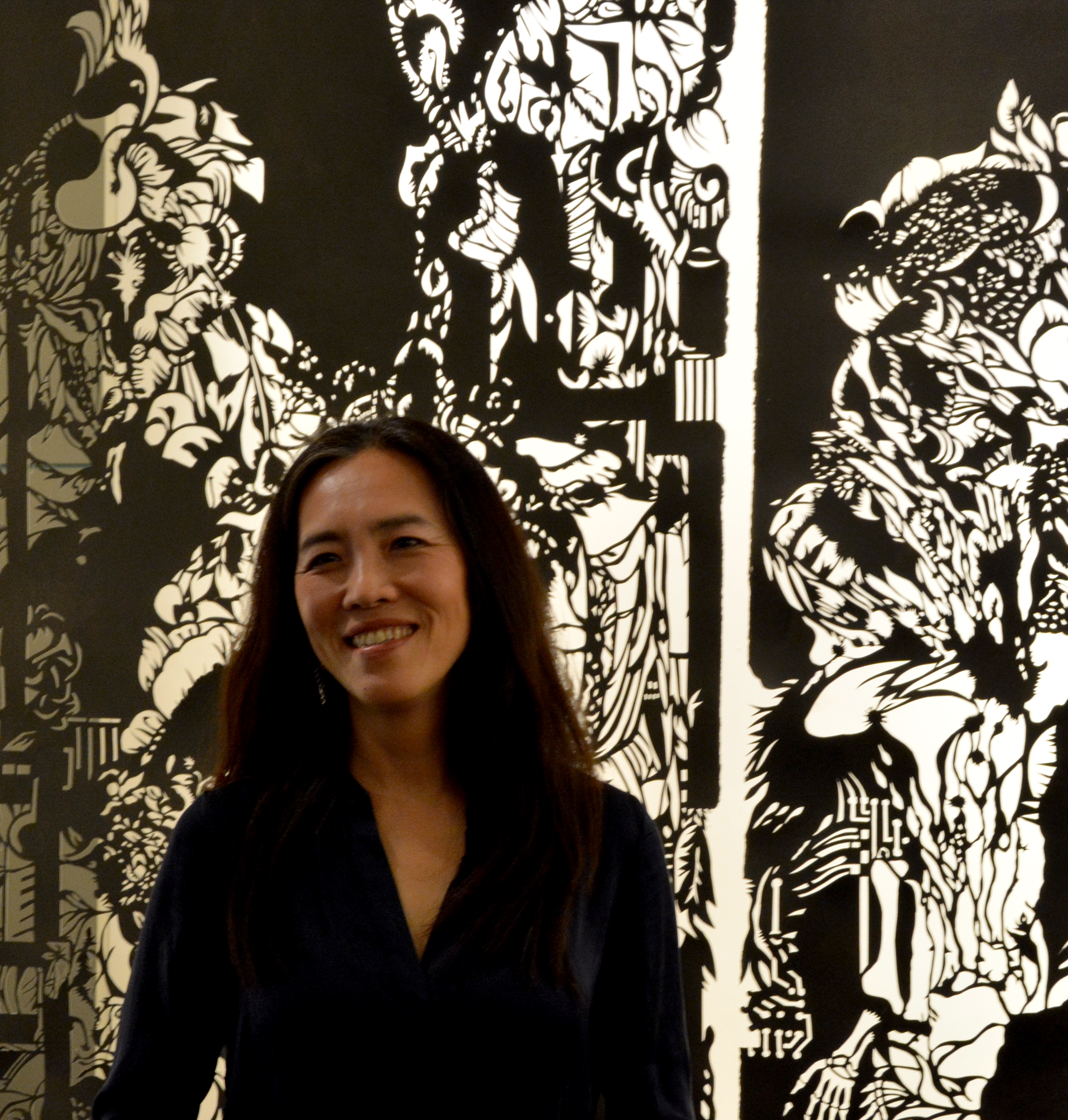 Dr Tianli Zu is an award-winning Australian multimedia artist. She was born in Beijing, China. After she graduated from the Central Academy of Fine Arts in China with a BA, she moved to Sydney in 1988. In 2010, she obtained MFA by research from the Sydney College of the Arts (SCA). In 2014 Zu obtained a PhD from SCA, the University of Sydney.

With over 30 years diverse art practice in Australia, Zu attempts to attain understanding, perseverance and harmony in the context of contemporary art.

Featured Items from the Launch

Brett has been employed at the Botanic Gardens in Sydney for over 30 years, initially as a plant pathologist and mycologist. From 2004 - 2019 he led the science and conservation programs there, including those at the National Herbarium of New South Wales and the Australian PlantBank. Now as the Director Research and Chief Scientist he leads the Research Centre for Ecosystem Resilience and PlantClinic and has responsibility for developing research priorities and partnerships, advocating for plant conservation and representing the Gardens in national and international forums.

He maintains a research interest in plant diseases and fungi and has published over 150 refereed papers and books in this area. He is an international authority on Fusarium diseases, including wilt diseases, and has co-convened 20 international training workshops on Fusarium training over 700 scientists from 79 countries. In 2017 he was made a Fellow of the Australasian Plant Pathology Society and in 2018 a Fellow of the American Phytopathological Society. He was President of the Australasian Plant Pathology Society for 2018-19. He is a member of the International Advisory Council for Botanic Gardens Conservation International. He held a Fulbright Distinguished Chair in Agriculture and Life Sciences based at Kansas State University for the latter half of 2018.

This piece is inspired by the exhibition Shadow World (2022) by Tianli Zu. The music traces the imagery and emotions conveyed by Zu’s craftsmanship, and explores the nuanced resonances imbued by her multi-layered textures and intricate interplay of yin and yang, light and shadow. The combination of theerhuand the violin is not simply another reference to the often-used 'east meets west' paradigm. Rather, both performers are given a theatrical role in embodying the essence of the masculine and feminine with the opportunity to switch their assigned 'genders' according to the concept of impermanence and transmutability in Chinese cosmological thought. In the light of a shadow pays homage to legendary female figures such as the primordial creator Nüwa, and the pantheon of gods and mythological beings featured in the exhibition.

Sydney-based erhu virtuoso Ying Liu 刘莹 has established an international reputation for her compelling performances and artistic individualism. Ying has performed and worked with many renowned musicians and ensembles across the world including Gerard Willems, Claire Edwardes, Richard Clayderman, Fang Jinlong, Wang Peng, Zhu Changyao and so on. She plays in “Ying & Dora Duet”, a newly formed string ensemble focusing on cross-cultural diversity and a variety of different musical genres.

Dora Maria is an in-demand acoustic/electric violinist and violist with a multi-faceted career across many genres. Currently based in Sydney Australia, Dora studied at the Royal College of Music in London before working as a regular session violinist. Dora has performed and toured with artists including Eminem, Flume, Taku, Sam Smith, Hanson, Michael Bublé, Hans Zimmer, London Grammar, The Stereophonics, Pete Tong for Ministry Of Sound, Peking Duk, Jess Mauboy, The Veronicas, Guy Sebastian, Delta Goodrem, Rai Thistlethwayte, Vera Blue and many more. She plays in “Ying & Dora Duet”, a newly formed string ensemble focusing on cross-cultural diversity and a variety of different musical genres. Bright is the moon in the sky, when can I ever embrace it?

Sorrow is born inside the heart; it can never be brought to an end.

Artists, more than most, are comfortable in an ambiguous world of shifting shadows and fluxing possibilities. In that world, in the words of Turkish playwright Mehmet Murat Ildan: “to speak with the shadow, you must know the language of the darkness”. Tianli Zu has inhabited this world of light and shadow since, as a small child during the Cultural Revolution, her grandmother gave her paper and scissors and showed her how to make a simple papercut. It was a momentary experience of joy and freedom in a world of sorrow, fear, and bitterness.

As a student at the Central Academy of Fine Arts, Zu travelled to remote rural villages in Shaanxi Province to learn the folk-art traditions of papercutting. Today, her evocative installations reveal a deep understanding of the contemporary possibilities of an ancient artform. Her work is underpinned by her exploration of eastern and western literature and philosophy and by a passionate interest in ecology. For Zu, the contrast between light and darkness is not a simple binary of opposites: her papercuts, video works and installations allude to the mutual interdependence of yin and yang in Daoist cosmology.

These oscillating forces represent complementary elements such as night and day, heat and cold, and masculine and feminine. Without yin, there can be no yang.[ii] Yin embodies the feminine principle, that which turns away from the sun and towards the moon, while the masculine yang turns towards the sun. Waxing and waning, always at the point of morphing into the other, “yin and yang constantly complement each other ... transform each other, and transmute into each other, in an ongoing process ... Both yin and yang can create, both can destroy.”[iii] These mutually reciprocal forces represent the interdependence of everything in the universe. Turning her attention to increasingly urgent issues of climate change and species extinction, Zu explores juxtapositions of east and west, death and rebirth, hope and fear in beautifully lit installations of cut paper and acetate film, projections and sound.

Evocative interplays of light and shadow create a mysterious, immersive space of hanging scrolls, papercuts, drawings and video, enhanced by Andrew Zhou’s soundscape. Circular forms represent breasts and the nurturing yin principle. Double-sided papercuts of native plants contrast destruction and regeneration. They remind us that the blackened bush after fire bursts with new life. On the reverse of each banksia, wattle and eucalypt flower, however, a skull drawn in charcoal evokes Vanitas paintings of the European tradition, with their intimations of mortality. With recent catastrophic fires and floods in mind, we understand Shadow World is a wake-up call. Tianli Zu’s world of light and shadow recalls the dire warning from Zhuangzi:  “When yin and yang go wrong, heaven and earth are hugely disturbed.”[iv]

[i] Translation of Cao Cao’s poem in “Lunar Longings”, The World of Chinese, July 2020 https://www.theworldofchinese.com/2020/07/lunar-longings/