Recent advances in insect microbiology have opened new avenues for biological control of insect pests. Understanding the biological roles of microbial communities in insects and deciphering their ecological and evolutionary impact on host populations may increase the success rate of insect biological control programs. Wolbachia is the most common insect associated microbe. It is a maternally inherited endosymbiotic bacterium that can manipulate the reproductive biology of its host, and it is therefore also known as a reproductive parasite. Cardinium is another common bacterial reproductive parasite of insects. The most frequent reproductive manipulation induced by these bacteria, cytoplasmic incompatibility (CI), is a crossing sterility between individuals of different infection status, and this leads to embryonic mortality of eggs.
CI has attracted attention in fundamental and applied research, as it impacts host ecology and evolution, but also can be applied in biological control of insects by suppressing uninfected field populations through the release of infected males – a strategy known as incompatible insect technique (IIT). So far IIT has only been developed and tested for control of some diplodiploid pest insects.

Kelly’s citrus thrips (Pzothrips kellyanus) of the haplodiploid order of Thysanoptera is an economically important pest of citrus native to Australia and invasive to New Zealand and the Mediterranean region. Previous research has demonstrated that populations of its native range are infected with both Cardinium and Wolbachia. However, populations from New Zealand and the Mediterranean region only have Cardinium. Both bacteria induce CI in this host species.

In this PhD project I aim to investigate the influence of Wolbachia and Cardinium on the reproductive biology, resource allocation and sperm competition of P. kellyanus. This will provide important information for the development and testing of endosymbiont-based IIT for this haplodiploid thrips species. 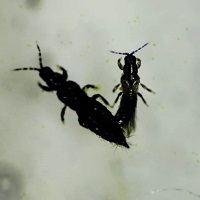 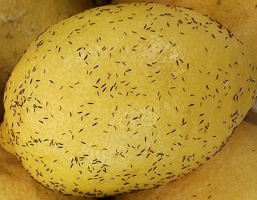 Katlav A, Hajiqanbar H, (2018) 'First description of male and larval female of parasitic mite Eutarsopolipus abdominis (Acari: Podapolipidae) with redescription of the adult female', The Journal of Parasitology, vol.104, no.1, pp 1-9

Katlav A, Hajiqanbar H, Talebi AA, (2015) 'First record of the genus Aethiophenax (Acari: Acarophenacidae) from Asia, redefinition of the genus and description of a new species', Asia-Pacific Entomology, vol.18, pp 389-395

Katlav A, Hajiqanbar H, Talebi AA, (2015) 'A new genus and species of mites of the family Caraboacaridae (Acari: Heterostigmata) associated with Clivina ypsilon (Coleoptera: Carabidae) with notes on distribution and host range of the family', Canadian Entomologist, vol.147, pp 370-38

Katlav A, Hajiqanbar H, Talebi AA, (2014) 'First record of the genus Acanthomastix Mahunka, 1972 (Acari: Dolichocybidae) from Asia, with the description of a new species', International journal of acarology, vol.40, no.1, pp 7-14