The peculiar case of Wolbachia in the common grass yellow butterfly

The α-proteobacterium Wolbachia is an extremely common intracellular maternally inherited symbiont of insects, other arthropods and filarial nematodes. In many cases, Wolbachia is seen as a reproductive parasite as it can manipulate host reproduction in a variety of ways to colonise host populations. These include thelytokous parthenogenesis, male-killing, cytoplasmic incompatibility (CI) and feminization, i.e. the change of genetic males into functional females. Wolbachia infections have a particularly intriguing role in Japanese populations of the common grass yellow Eurema hecabe (L.) as they were found to be singly or doubly infected with two Wolbachia strains that induce CI and feminization, respectively. E. hecabe is widely distributed in Africa, Asia and also occurs in Australia. Previous work has indicated the presence of feminised males as well as Wolbachia in Australian populations. Although their infection type, frequencies and geographic expansion has not yet been studied.

The aim of this project is to genotype Wolbachia infections in Australian populations of E. hecabe, to determine their infection frequencies and geographic distribution. The evolutionary history of Wolbachia in E. hecabe will be studied by looking at variations in mitochondrial DNA populations that are potentially co-inherited with Wolbachia. I also envisage the study of functional mechanism of feminisation by comparing the transcriptome of females, males and feminised males in early developmental stages by using next generation sequencing platforms.

Overall, this study aims to shed light into the population dynamic and functional processes of Wolbachia induced feminisation in E. hecabe. 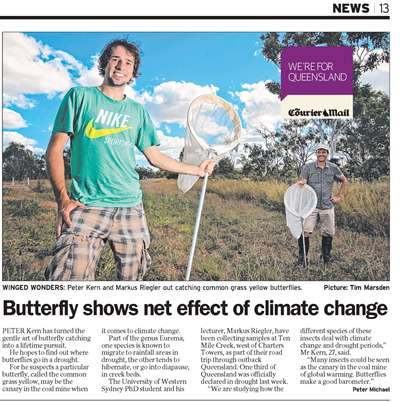