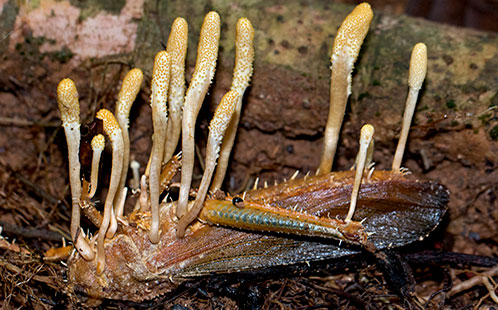 Cordyceps fungus consumes the body of a grasshopper and ejects spore-bodies out of the grasshopper. Image credit Flickr/Aaron Pomerantz - under Creative Commons 2.0.

Pick up a handful of soil and you’ll be holding a vast, rich community of microbes numbering in their billions. Scientists have recently begun to analyse the microbial ‘fingerprint’ of these organisms to determine which types and how many of each are present.

Results of this study have been published in Nature Communications and found that although the numbers of microbes in soils are vast, most belong to just a few common species. This means that the diversity of common microbes in soils is far less than predicted.

“Scientists know that different fungi in soils are responsible for the way that forests and farmlands work”, said Dr Eleonora Egidi, Postdoctoral Fellow in Soil Microbiology at the Hawkesbury Institute for the Environment.

In our latest article, just out in @NatureComms https://t.co/WY9y6W8Y5O, we found that <0.1% of fungi, mostly belonging to Ascomycota, dominate soils globally. We mapped their global distribution and found that contain multiple genes related to stress-tolerance & resource uptake pic.twitter.com/Ehl1YPyEUu

“The wide distribution of a few major fungal types could have been driven by agriculture as these fungi are often associated with crops”, said Dr Egidi.

Advances in genetic identifications systems have created huge databases of fungal DNA profiles that can be used to identify the microbes present in a soil sample. Scientists use these databases to match samples from the environment against known fungi and can determine which fungi are present.

This is increasingly important as the natural world and farmland changes and scientists look towards naturally-occurring organisms to improve environmental, agricultural and even medical outcomes using bacteria, fungi and other microbes.

For example, members of the group of fungi known as Ascomycetes have been used to make insecticides as they colonise the bodies of insects and then consume the insect’s body as the fungus emerges.

“Having a baseline understanding of which fungi are out there in our forests, grasslands, farms and deserts can help us preserve these environments and find innovative new uses for many of the natural inhabitants of those places”, said Dr Egidi.