Agribusiness Cooperation Between Australia And India Deputy Prime Minister Hon. Michael McCormack and the High Commissioner of Australia to India, His Excellency Dr Ajay Gondane are chief-guests for the event. The report is being co-launched by new Trade Minister Senator Hon Simon Birmingham, and Agriculture Minister the Hon. David Littleproud, MP. 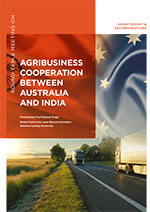 Download the Expert Report and Recommendations (PDF, 1417.59 KB) (opens in a new window)

The report and recommendations from a round table meeting on agri-business cooperation were prepared by Prof Brajesh Singh, Director of the Global Centre for Land-Based Innovation at Western Sydney University.

Although Australia and India enjoy a strong and developing strategic bilateral partnership, and despite strong political support at the highest levels on both sides, progress on the much awaited Free-Trade Agreement (FTA) has slowed, with agribusiness being one of the main constraints. The recommendation prioritizes areas for cooperation that would benefit the Agribusiness sector within both countries, promoting bilateral cooperation including the FTA.

The key recommendations from the round table meeting included:

Mr McCormack said in 2017 more than $20 billion in product was traded between Australia and India and enhancing opportunities in areas such as agribusiness and infrastructure had shared economic benefits for both countries.

“Growing two-way trade between our two nations can directly benefit the citizens of both countries and especially for those who live outside our cities who The Nationals represent,” he said.

“In my home town of Wagga Wagga in my Riverina electorate a custom-built plant crushes a significant proportion of the New South Wales canola crop, to produce refined oil.

“This product is being exported to a number of countries, including to India, through a joint venture with a major Indian food group.

“We welcome work such as this report on agri-business cooperation between Australia and India which we hope can increase the number of success stories like this in regional Australia while contributing to continued dialogue between stakeholders.”

Prof Singh said: “India is the world’s fastest growing major economy and is an emerging global power. Combined with its geo-location, rapidly growing middle class and educated and skilled technologists, India offers unprecedented strategic and economic opportunities. This report maps out key steps which can be implemented simultaneously to boost Australia- India cooperation in agribusiness”.

Agriculture Minister the Hon. David Littleproud, MP said: “Australia and India are important trading partners. If we can cooperate together on agribusiness, we can build an even greater future.”

Indian High Commissioner His Excellency A Gondane stated “India, principally, is an agricultural country where 60% of its population depend on agriculture. Increase in productivity in the agriculture sector is an imperative for maintaining India’s growth of over seven percent annually. Joint research in this vital sector between scientists from Australia and India would go a long way in improving agri-practices and optimising the production and post-harvest value addition.”

“Western Sydney University has a history of knowledge exchange with Indian partners for capacity building for industry. We will be taking a delegation to India in November to extend a number of partnerships with high-profile universities, industry groups and government with a focus on agribusiness.”

Both Australia and India are engaged in developing strategic partnerships in various sectors with mutual benefits.