International Women’s Day (IWD) is celebrated internationally on the 8th of March each year and provides a day for celebration and reflection on the social, economic, cultural and political achievements of women. This day also marks a call to action for gender parity.

This year students, staff and community partners are invited to attend our annual International Women’s Day event on Monday 8th of March from 1pm to 2:30pm.

The event is will bring together a panel of experts from across the University to reflect on the 2020 experience and discuss the gender equity lessons and opportunities we are now presented with both in higher education and across our broader community.

Registrations are now closed for this event.

For more information or to register your interest email katie.hayes@westernsydney.edu.au.

Western Sydney University has celebrated and hosted International Women’s Day events for many years. Highlights of previous years’ events are outlined below. In 2020 Western will be highlighting some of our leading and emerging Women in Research through a series of events across our campuses. Watch this space to find out more about events that will celebrate International Women’s Day at the University.

This year’s International Women’s Day event was celebrated on Monday 9th March at the Parramatta South Campus. A luncheon was held to celebrate the contribution of women from all areas of our university, both professional and academic staff. Professor Anna Cody, Dean School of Law, opened the event with addresses from Vice Chancellor Professor Barney Glover and Professor Deborah Sweeney. They spoke about the world we are living in and the role women have played in society. Distinguished Professor Belinda Medlyn from Hawkesbury Institute for the Environment delivered the keynote address. Professor Medlyn has many achievements under her belt but chose to focus her address on navigating life circumstances and career opportunities. She credited her receptiveness to change and the support of her family to her accomplishments. Professor Medlyn answered questions from the delegates and provided advice on how to make the best of your life journey.

The luncheon was the central meeting point for both the Network for Emerging Women who hosted a morning event, and the Senior Women’s group who hosted an afternoon event.

Professor Kerry Robinson from the School of Social Sciences and Psychology

Western's early/mid-career Academic Advisory Groups, with the support of the Deputy Vice Chancellor, Research and Innovation and Talent and Leadership Development, hosted a series of events showcasing early and mid-career female academics on their campus, with an opportunity for sharing ideas and networking across disciplines.  These events served to provide a platform for developing researchers, and facilitate increased awareness of research initiatives currently underway across the University.

Professor Lynn Kemp, Director of Translational Research and Social Impact Research Group (TReSI) within the School of Nursing & Midwifery, provided the keynote address and opened this event, and introduced 12 early/mid-career female researchers outlining their current research focus, and their lived experience as a developing researcher.

The Bankstown Campus ECA/MCA Advisory Group celebrated and shared the achievements and experiences of Western Sydney University female staff and students on International Women's Day. The event intended to be friendly, sociable and supportive and showcased exciting research projects from multiple Schools and research fields, as well as important leadership work happening in our curriculum innovation spaces.

In the spirit of International Women’s Day, the Penrith early/mid-career academic advisory group hosted an event which engaged a panel of female researchers to discuss how working with inspirational women has supported them in their careers to date. The event served to showcase some of the innovative and inspiring work the researchers are currently engaged in.

This lunch time event was hosted by the Deputy Vice-Chancellor, Research and Innovation to recognise the hard work and dedication of female academics across education and research at Western and beyond. Alice Brennen, Executive Producer Background Briefing, Radio National ABC presented her journey as an investigative journalist, and the importance policy played in her work and in shaping public conversations.

Each year, Western Sydney University publicly celebrates the outstanding leadership and diversity of women who live and work in Greater Western Sydney. The Women of the West Awards honours these women and formally recognise their contributions to the development of the region. The awards ceremony was held on International Women's Day, 8 March 2019, at a special lunch event in conjunction with the Coleman Greig Women in Business Forum. Western Sydney University hosted a series of events for IWD in 2017. It was fortunate to have Professor Sharon Bell from the Australian National University as our guest speaker at our IWD Breakfast. Professor Bell's presentation "Be Like Gough: 75 Radical Ideas to Transform the Australian Academy" explored the current patterns of participation and success of women in higher education and looked at the implications for our sector, our students, our communities and our future, laying the challenge to find different, and radical, ways to transform the academy to better reflect the diversity and values of our communities.

Professor Bell also hosted a workshop for early career research staff on our Parramatta campus titled "Still Waiting in the Wings?" - exploring the current patterns of participation and success of academic women in higher education and the relevance of the enduring questions How Far Have We Come? and Why So Few? View Professor Bell's presentation. PDF, 646.99 KB . The full recording is available via the Reseacher Skills icon in My Career Online (staff login required).
A senior women's dinner was also held with Professor Bell as guest speaker. 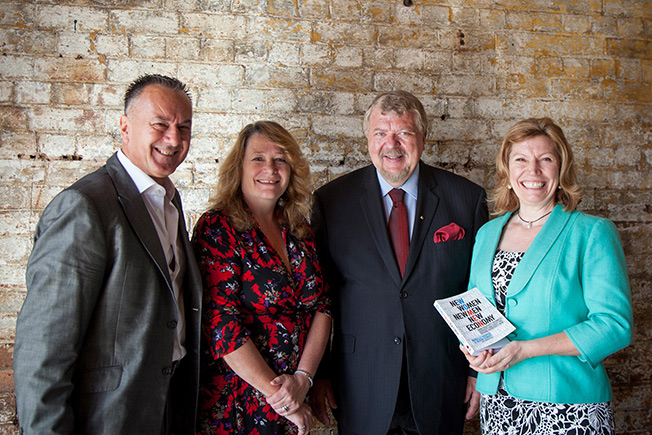 The 2016 theme for International Women's Day Pledge for Parity was taken up by the Vice-Chancellor in his opening address for our International Women's Day staff breakfast on the 8th of March. Professor Glover spoke of the need to keep a strong focus on gender equality and women's rights. He outlined the University's Gender Equality Strategy and urged staff to think about the actions that they could take to help achieve gender parity more quickly. This was followed by an engaging presentation on Using Gender Equality to Drive Innovation and Success by guest speakers Rodin Genoff and Narelle Hooper, authors of the recently released and highly acclaimed book "New Women, New Men, New Economy".
The Annual Western Sydney Women of the West and Young Women of the West Awards were held on Friday 18 March at Parramatta Campus. Ambassador for the Awards was Lisa Wilkinson AM, with special guest speaker Lucy Turnbull AO, Chief Commissioner of the Greater Sydney Commission.

A Staff Breakfast at the Boilerhouse Restaurant on Parramatta Campus hosted by the Vice-Chancellor. Guest Speaker Barrister Jane Seymour spoke about the impacts of the new Workplace Gender Equality Act and proposed changes to Anti-Discrimination legislation.

The 2012 Brunch was hosted by the Acting Vice-Chancellor and included a keynote address by Associate Professor Susanne Gannon and a musical performance by UWS Student Kay Proudlove. Link to YouTube video clip of the IWD Staff Event.(opens in new window)

A community event, hosted by the Vice-Chancellor at which the Annual UWS Women of the West Awards were announced.