"Our goal [at Western Sydney University] is to promote and embed a gender-aware and gender-responsive culture that understands gender equality as a core value. That's our commitment." Professor Barney Glover, Vice-Chancellor and University President.

Gender equality is about fundamental human rights and is integral to our commitment to be a world class university.

Western Sydney University has a proud record for advancing gender equality. Considerable effort has been made to increase the representation of women in leadership positions, to reduce the gender pay gap, and to promote workplace flexibility.

Currently over 50% of our staff and students are women, 47% of our managers are women, and we have one of the highest rates of women professors (41%) in the sector. I want to build further upon this impressive foundation. If we are to be leaders in excellence in teaching, innovation, and research, it is critical that we utilise the skills and capacities of all our staff.

To progress gender equality further we must also continue to challenge the beliefs and attitudes that are undermining progress. We must expand out focus of workplace flexibility and be more innovative and creative in how we overcome the barriers that women and gender diverse individuals face. While we have the policies and procedures in place more dialogue and action is needed to help address these challenges.

To guide this process, I have established the Gender Equality Committee to assist in implementing the University's Gender Equality Strategy and Action Plan 2015-2020. The Strategy seeks to support the University's efforts in recruiting, retaining and helping female staff to advance. Furthermore the Strategy also seeks to develop and achieve a deeper understanding and commitment to gender equity across the entire organisation.

In response to the Strategy, we have:

I want to continue the University's proud reputation as a sector leader in gender equality.

Western Sydney University is an Employer of Choice for Gender Equality

This citation was awarded by the Federal Government's Workplace Gender Equality Agency (WGEA) on 25 February 2019. This marks 14 consecutive years that the University has received the award.

In congratulating award recipients, Agency Director, Libby Lyons stated “Each year, I am delighted to see the innovative approaches taken by our citation holders in implementing actions and programmes that we know drives change. I congratulate all of our 2018-19 EOCGE citation holders for being such important agents for change. They 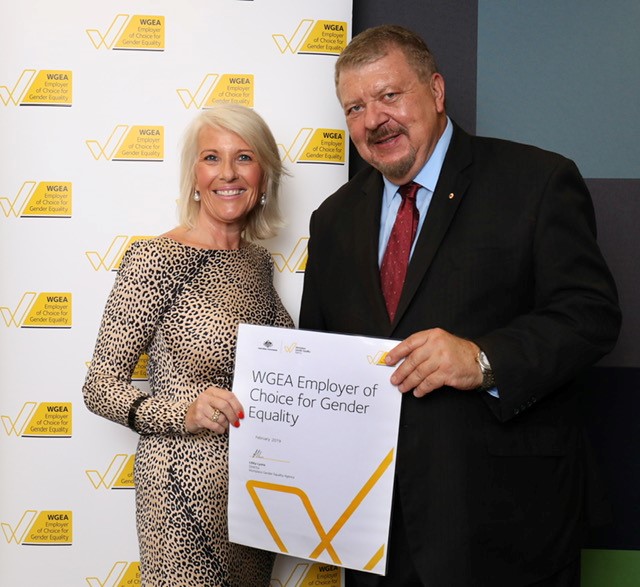 are leading the way forward for other Australian employers to follow." View WGEA media release.

The Vice Chancellor welcomed the citation stating "I am delighted to announce that as a result of the University’s commitment to providing an inclusive and fair workplace culture, we have once again been awarded the citation as an Employer of Choice for Gender Equality (EOCGE) by the Workplace Gender Equality Agency...We will continue to strive to be innovative and creative in our approach to overcoming the barriers that women, and individuals of all genders and orientations, continue to face." View full media release here.

Under the Workplace Gender Equality Act 2012, Western Sydney University has an obligation to improve and promote equality for women and men in the workplace.

The University is also required to report to the Workplace Gender Equality Agency (WGEA) annually on a set of standardised reporting matters under six gender equality indicators. The reporting period refers to the 12 months from 1 April to 31 March annually.

The 2018-2019 Public Report has been lodged with the Workplace Gender Equality Agency.

Comments on the report can be made to  Ms Michelle Falconer, Senior Manager of Equity and Diversity at m.falconer@westernsydney.edu.au or to the Workplace Gender Equality Agency.

If you require the Report in another format please phone Equity and Diversity on 9678 7378.

If successful, this will be the 15th consecutive year the University has been awarded the EOCGE citation. The process promotes gender equality while recognising the historically disadvantaged position of women in the workplace. Key focus areas the comprehensive application assesses are leadership; gender pay equity; support for carers and flexible working; and preventing gender-based harassment and discrimination.

Mothers are the backbone of many of our family units - often the primary nurturers and caregivers and the first port of call for a skinned knee or lost tooth. However, at WSU we want to shine a light on the unique contribution Dads make in raising children. This morning tea event included presentations from the Dean of the School of Business, Prof Amir Mahmood, along with a raft of speakers, who shared personal stories of fatherhood and research about the changing role of Father's today. The event also launched the Western Dad’s Calendar for 2020, which includes a series of images and quotes from Western Dads who are staff, students and alumni of Western.  This event and related research were funded by the Vice-Chancellor's Gender Equality Fund.

Western Sydney University has been ranked 1st in the world for its work to address gender equality, and 2nd for reducing inequalities by promoting inclusive and equitable quality education, according to the inaugural Times Higher Education University Impact Rankings, released in April 2019.

Vice-Chancellor and President, Professor Barney Glover AO, said the University is very proud of its work to help address many of the Greater Western Sydney region’s – and indeed the world’s – most pressing challenges. “As one of a small group of Australian universities that became a signatory to supporting the UN Sustainable Development Goals, we are deeply committed to tackling issues such as improving access to education and addressing inequality,”

View the full release here, or read the report included in The Educator Magazine.

Our annual International Women’s Day Staff Breakfast was be held on Friday 8 March, and provided an opportunity for staff to celebrate the achievements of women in our community and to share ideas on promoting greater gender equality.

This year our keynote speakers were be Professor Kerry Robinson from the School of Social Sciences and Psychology and Associate Professor Susanne Gannon from the School of Education. Professor Robinson and Associate Professor Gannon were the recent recipients of a 2019 ARC grant for their research project Gender Matters: Changing gender equity policies and practices.   Their presentation ‘Gender Matters: Changing Times, Policies and Practices’ drew on their current ARC research focus, looking at the different ways gender has been approached and understood in Australian education.  It also considered how we might refresh and refocus our understandings of gender for the present.

To find out more about other events celebrated on the day visit our International Women's Day webpage.

WSU to partner in development of Respectful Relationships training program

As part of our commitment to prevent sexual assault and harassment, and to promote positive relationships, Western Sydney University has agreed to participate in the development of a respectful relationships education program to be implemented across the Australian University sector. Western is one of four Australian universities to contribute to the first-of-its-kind education program and online training module specifically tailored for Australian university students.

The initiative involves Universities Australia (UA), in partnership with lead violence prevention organisation Our Watch, and the Victorian Government’s Office for Women. Together with La Trobe University, Monash University, and Southern Cross University, we will work with UA and Our Watch to develop the online education module, drawing on the best-available evidence and expertise from online learning and violence prevention experts. The program will be trialled with students over the next 18 months.

This online education module is part of the wider program, the Respect and Equality Program (REP) to promote gender equality in our universities. The REP will also include developing workplace standards for the university sector, and creating training packages, resources and toolkits for students, staff, senior leadership of universities and the broader community.

Through the Respect.Now.Always. campaign, the University has implemented a number of initiatives and strategies to affirm that sexual assault and harassment is not tolerated at this University. For further information about these initiatives visit: https://www.westernsydney.edu.au/respectnowalways

In the fourth year that data has been collected, the WGEA ‘Scorecard’ provides a comprehensive snapshot of Australia’s workplace gender equality performance. The report highlights areas which have improved, as well as those that still require attention.

To view the data in more detail visit the WGEA Data Explorer.

On 20 June 2018 Australia’s Sex Discrimination Commissioner, Kate Jenkins, announced a national inquiry into sexual harassment in Australian workplaces. The Commission has opened a submission process with the aim of hearing from as many people.  Consultations will also be held in all Australian capital cities and a number of regional cities later in 2018.

The National Inquiry will review and report on:

Women in Leadership: Lessons from Australian companies leading the way

Developed by the Workplace Gender Equality Agency in cooperation with the Business Council of Australia (BCA) and McKinsey & Company, Women in Leadership: Lessons from Australian companies leading the way, provides an evidence-based recipe for dismantling barriers to women’s participation at senior levels. The report reveals how high-performing companies use a suite of 10 practices to achieve change and how these practices can be customised to overcome industry challenges.

Western Sydney University is committed to improving and promoting gender equality in the workplace. Achieving gender equality will enable the University to attract, motivate and retain a diverse and high performance workforce, reduce the incidence and costs of employee turnover, improve productivity, innovation and creativity, secure research funding, and build social inclusion. To reflect our continued commitment to gender equality the University has developed the Gender Equality Policy which is now available on the staff Policy DDS. This policy applies to all employees, officers, and members of University committee.

Initiatives aimed at 'engaging men' to address gender inequality have gained popularity in recent years. But how much do we really know about the most effective ways to engage men in gender equality? The Diversity Council of Australia (DCA) has released a new report, Men Make a Difference: Engaging Men on Gender Equality. Sponsored by Programmed the report examines the evidence for what works and what doesn't, and recommends more effective ways to engage men to achieve gender equality at work.

A Conversation in Gender Equality

In the second half of 2016, Federal Sex Discrimination Commissioner Kate Jenkins travelled to every state and territory to learn about Australia's progress towards gender equality. The Australian Human Rights Commission has recently released a paper on the key focus area's which came out of the Commissioner's observations and discussions including  violence against women, women's economic security and women's voice and diversity in decision making. A Conversation in Gender Equality. (Opens in a new window)