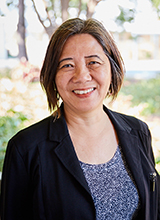 Distinguished Professor Ien Ang is a Professor of Cultural Studies and was the founding Director of the Institute for Culture and Society. She is one of the leaders in cultural studies worldwide, with interdisciplinary work spanning many areas of the humanities and social sciences. Her books, including Watching Dallas, Desperately seeking the audience and On not speaking Chinese, are recognised as classics in the field and her work has been translated into many languages, including Chinese, Japanese, Italian, Turkish, German, Korean, and Spanish. Her most recent books are Chinatown Unbound: Trans-Asian Urbanism in the Age of China (Rowman and Littlefield, 2019, co-authored with Kay Anderson et al) and Cultural diplomacy: beyond the national interest (Routledge, 2016, co-edited with Yudhishthir Raj Isar and Phillip Mar).

She is the recipient of numerous Australian Research Council grants, including a prestigious ARC Professorial Fellowship (2005-2009). She currently works on two ARC Linkage projects: The Collaborative Museum: Embedding Cultural Infrastructure in the City (with Deborah Stevenson, Malini Sur and Zelmarie Cantillon) and Diversifying the Regional Art Museum (with Veronica Tello and Salote Tawale).

As a leading scholar in the field and a Fellow of the Australian Academy of the Humanities, she is frequently called on for keynote addresses in Australia and internationally. She is a champion of collaborative cultural research and has worked extensively with partner organisations such as the NSW Migration Heritage Centre, The Art Gallery of New South Wales, The Special Broadcasting Service, the Museum of Contemporary Art and the City of Sydney and the Museum of Arts and Appliances.

Professor Ang has had the title of Distinguished Professor conferred on her by Western Sydney University in recognition of her outstanding research record and eminence. She was the first person at the University to be conferred with this honour.

Professor Ang's innovative interdisciplinary work deals broadly with patterns of cultural flow and exchange in our globalised world, focusing on issues such as:

Ang, I 2001, On not speaking Chinese: living between Asia and the West , Routledge, London & New York.

Professor Ang spoke to the 'New Stories. Bold Legends: Stories from Sydney Lunar Festival' podcast about her life, her work, and her multicultural identity. Listen to the podcast (opens in a new window).