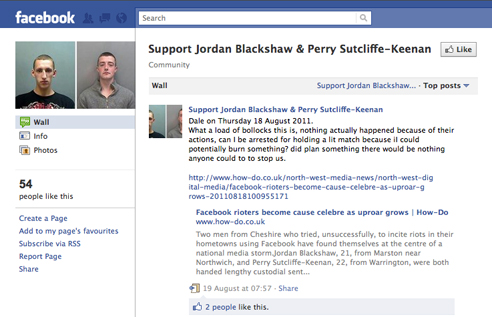 Last week I wrote a satirical piece on a failed attempt by some people to organize a riot via Facebook in my home town in south west England (They Arranged a Riot on Facebook, But Nobody Turned Up). I reported that two people were arrested for incitement to riot and made a little sport with xenophobic, anti-government rioting wannabes who can’t spell.

A few days later, in the north west of England, two other failed Facebook riot organisers from provincial towns faced the courts. Jordan Blackshaw, a 20-year-old from the village of Marston, Cheshire and Perry Sutcliffe-Keenan, 22, from nearby Warrington, both pleaded guilty to offences under sections 44 and 46 of the Serious Crime Act (maximum sentence 10 years) of intentionally encouraging another to assist the commission of an indictable offence.

Blackshaw’s crime was to create a Facebook event, intended for the “Mob Hill Massive Northwich Lootin”, called “Smash d[o]wn in Northwich Town”, enjoining people to assemble “behind maccies” (McDonald’s) in Northwich (pop. 19, 259) between 1am and 4am on 9 August, adding the comment “We’ll need to get this kickin off all over”. Sutcliffe-Keenan, who had never met Blackshaw, separately set up a page called “Warrington Riots”, woke up with a hangover, took the page down and apologised, pleading a lame sense of humour.

Chester Crown Court Recorder Elgan Edwards, an instant hero of right-wing newspapers like the Sun and the Daily Mail, did not share the accused men’s penchant for sub-Ali G, try-hard Whitey gang talk, and sentenced both to 4 years jail, despite the fact that nobody answered their call, they had entered guilty pleas, and had no serious ‘previous’. The judge, proclaiming the sentences to be of a deterrent nature, admonished Blackshaw:

‘This happened at a time when collective insanity gripped the nation. Your conduct was quite disgraceful. You sought to take advantage of crime elsewhere and transpose it to the peaceful streets of Northwich.’

‘You caused a very real panic and you put a very considerable strain on police resources in Warrington. You changed your mind and posted a retraction but it does not change the evil of the offences’.

Sociologists with long memories will have had intimations of the famous 1964 ‘Sawdust Caesars’ sentencing speech addressed by magistrate Dr George Simpson – ostensibly to mods and rockers, but really to the nation at large – as recorded in Stanley Cohen’s seminal book 1972 Folk Devils and Moral Panics and the 1979 film Quadrophenia (brainchild of ex-Mod Pete Townshend of The Who).

There was no Facebook then, and no World Wide Web instantly to carry the words of judicial denunciation. But the pattern of behaviour remains the same. Youthful social disorder prompts an outcry that demands ‘exemplary’ sentencing by the police and moral entrepreneurs, and the judiciary duly obliges. In other words, the over-the-top sentencing and language mirrors the collective loss of control that it is putatively trying to manage – and with a corresponding lack of interest in the consequences beyond the here and now.

The point is not to play down the seriousness of offences when they occur (although exaggeration is common). But responding to one form of reprehensible collective conduct with an officially-sanctioned version is certain to create further malign consequences, and without even coming close to dealing with the issue of causation. The conservative UK Justice Secretary Kenneth Clarke only recently argued that:

‘Prisons are not hotels, they are not comfortable, they are overcrowded, they are noisy. Anyone who visits a prison soon realises the prevailing atmosphere is one of stupefying boredom on the part of inmates. It is just very, very bad value for taxpayers’ money to keep banging them up and warehousing them in overcrowded prisons where most of them get toughened up’.

After the Riots and all the calls for more incarceration and longer sentences, the prison problem identified by Clarke must become worse. Where will the next tranche of offenders from the next round of riots (for those UK politicians and journalists with short attention spans, these have occurred in some form, more than once, every decade in and beyond living memory) be housed? The answer cannot lie with another bout of judicial gang tackling.

David Rowe is Professor of Cultural Research at the University of Western Sydney, and author of ‘The Concept of the Moral Panic: An Historico-Sociological Positioning’, in David Lemmings and Claire Walker (eds) (2009), Moral Panics, the Press and the Law. New York and Houndmills, UK: Palgrave Macmillan, pp. 22-40.