Who or what is the real Julia? 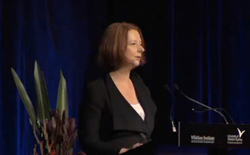 It's a legitimate question to ask of our first female Prime Minister, if only because she herself raised it as an issue during the 2010 election campaign.

At the time it was seen as a bizarre gaffe, or at the very least an admission of Labor's tactical missteps during a poor campaign. But, six months into Gillard's prime ministership, perhaps we're beginning to realise that there is a real Julia lurking there after all. And the real Julia appears to be more conservative that many first realised.

In a series of what might be called "headland speeches", the Prime Minister has set out her values and her beliefs. Two recent speeches in particular warrant close examination, because of what they tell us about this Prime Minister and her underlying philosophies. In the washing machine of our 24-hour news cycle, both speeches were reported. But, with the exception of commentaries by Jeff Sparrow and Peter Botsman (opens in a new window), neither was particularly carefully analysed.

At the end of March, Gillard spoke to the Whitlam Institute in Western Sydney. The speech came just days after New South Wales Labor's destruction at the polls. After years of scandals and repeated failures of governance, of spin and factionalism, voters had turned against Labor in Australia's largest state. Much of Labor's heartland turned blue.

Gillard acknowledged this, arguing that "Our party in this state has suffered a shattering, but expected, defeat which must never be forgotten". She urged the dwindling band of branch members and bussed-in union delegates that passes these days for Labor's "faithful" that "NSW Labor must now confront questions of character and culture", an understatement if ever there was one. She urged new leader John Robertson "that as he leads the task of rebuilding Labor his most trusted advisers must be the people of NSW themselves". It's fair to say the chances of that occurring are minimal.

This was also the speech in which Gillard attacked the Greens and praised Labor's values of hard work and setting the alarm clock early.

They have good intentions but fail to understand the centrepiece of our big picture – the people Labor strives to represent need work.

And the Greens will never embrace Labor's delight at sharing the values of everyday Australians, in our cities, suburbs, towns and bush, who day after day do the right thing, leading purposeful and dignified lives, driven by love of family and nation.

Gillard thinks The Greens are different from Labor in two big ways. Firstly, they don't believe in a strong economy. Secondly, they apparently don't share the values of everyday Australians, like love of family or patriotism. It was a big call that many in the media rightly picked up on. In a different part of the speech she talked about Labor's disdain for the "lifestyle of the socialite".

These are conservative talking points, softened by only the barest sheen of a commitment to concepts like fairness. Attacking the Greens for their values is an unadorned gambit to differentiate Gillard and Labor from the cliché of the inner-city, latte-sipping progressive voter.

But there is a problem with this sort of rhetoric, and it's not just the fact that many socialites happen to vote Labor. To begin with, it's inherently divisive. By contrasting Green voters with the hard-working decent folk who vote Labor, Gillard is constructing a distasteful morality tale about good and bad people. Good people set their alarm clock early and love their nation and family. Bad people stay out late socialising and don't believe in the dignity of work. It's a flimsy argument that has little in common with the real world.

We are used to seeing this sort of demonisation of the idle poor and the trendy progressives from conservative politicians. And, in fact, many aspects of Gillard's speeches appear to expound what are essentially conservative beliefs.

Two weeks after her Whitlam Institute effort, Gillard gave an address to a conservative think-tank – the Sydney Institute. It was entitled "The Dignity of Work" and much of it was devoted to her vision for welfare reform.

I will fight the prejudice that says some people's lot is drawing a fortnightly cheque, that we shouldn't expect anything more of them and it doesn't matter if they are forgotten by policy makers and the society around them.

The social and economic reality of our country is that there are people who can work who do not.

The subject of work – its benefits and its constraints, its necessities and exigencies – continues to be an important topic of academic research. Much recent research has focussed on the precarious nature of labour in the modern economy. In a society where a job is no longer for life, where a worker's skills must be constantly updated to be of value, where technology destroys and creates occupations at a dizzying pace, and where footloose capital can quickly transfer large industries away to foreign countries, the topic of work is critically important.

And yet the Prime Minister seems more interested in moral opprobrium than the hard policy choices that will be required to make a dint in this problem.

No doubt there really are some genuine dole-bludgers still hiding somewhere in the vast entrails of Centrelink. But a trip down to your local Centrelink will quickly assure you that the reality for most job-seekers and disability pensioners is quite different. This is because our workforce possesses many fewer jobs for the unskilled than is often assumed, as Eva Cox observed recently. It is also because the soft skills of social nuance and acceptable appearance are every bit as vital to landing a job as a trade certificate or a willingness to work. These are the skills that erode quickly without contact with the workforce, and they are not easily learnt in the bewildering and underfunded Job Network agencies.

Moving long-term welfare recipients into work requires a number of things that the Prime Minister seems not to have canvassed in her speeches. One is a source of demand for labour for the unskilled. The large corporations investing so much money in Western Australia have little need for the truly unskilled; indeed, they're not even employing as many local tradespeople as Western Australian unions would like. Across the economy, businesses are investing less in training than they did a generation ago, despite the obvious need.

As employment becomes more seasonal, casual and precarious, our economy is in many respects hollowing out in ways that the 5 per cent unemployment rate doesn't describe. There is work for the highly skilled and there is work for people who can offer services that can't easily be automated or delivered from overseas. But manufacturing is declining inexorably, and many fast-growing sections of the economy demand sophisticated computer literacy and deliver little in the way of steady, full-time jobs. The large factories, warehouses and call-centres that used to be employers of school leavers are closing. The fastest growing sectors of employment in our economy are professional and technical in nature (opens in a new window), and often involve delivering complex intellectual services such as health-care or education.

The uncomfortable reality of this debate is that long-term unemployment is a class issue. It is the most vulnerable members of our society that find regaining employment the most difficult. As the sociologists have been telling us for decades, wealth comes in many different forms. Money in the bank is one thing (not that you can have very much of that before Centrelink starts cutting off benefits). But probably more important are the social and cultural forms of capital: things like a sophisticated command of spoken and written English, and the social nous to understand what to wear and how to make eye contact in a job interview. And yet a recent Lateline Business report quoted skills councils figures suggesting that perhaps eight million Australians don't have sufficient skills for training or their work.

These are big issues, and ones that would normally exert much influence on a Labor government. In the Hawke-Keating government, there were prominent cabinet ministers like Brian Howe who spent most of their time and effort on addressing the transformation of the economy. But when this Prime Minister turns to them, she has little to offer beyond platitudes about the dignity of work.