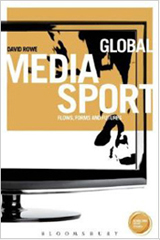 Book publishing has long been the fustiest of the cultural industries. That's probably why many of us have a retro-affection for it and self-identify as bibliophiles. But the digital tide that first lapped its shores is now moving to higher (educational) ground, and my feet just got a little wetter.  I'm involved in a new publishing model devised by Bloomsbury (home of J.K. Rowling, Harry Potter Junior, Lou Reed, Margaret Atwood, Khaled Hosseini, Winston Churchill, Nadine Gordimer, Hunter S. Thompson, Nora Ephron and Edward Said), which has set up the Bloomsbury Academic Digital Platform. I have authored a new work that can be bought both in good old-fashioned print form and as an ebook (a now-unremarkable arrangement) for a cool 'fifty squid'. What is new, though, is that it is also available in HTML full-text online under a Creative Commons non-commercial licence for nowt, as they say in the more parsimonious parts of northern England.

So, with luck the book will make back the notional cost of its production to the publisher (leaving out the cost to my university of paying me a salary and the cost to me of working too many anti-social hours in solitary confinement) and a little besides, and also reach people who can't access or afford the print or e-version, which might in turn lead to wider circulation and additional sales. Those who wish to savour the feel and smell of a book with a reassuringly authoritative hard cover will have to cough up, go to a sympathetic library, or find a quiet corner of one of the last small high-street bookshops standing. Everybody else will just have to go online and find it.

There's often more than a whiff of advertising about the sharing of information in the digital world, and this message is no exception. But I do take some pleasure in knowing that what I've written can be accessed in different (plat)formats and at price points ranging from the not inconsiderable to the virtually non-existent.