Crash survivor and living life with a brain injury 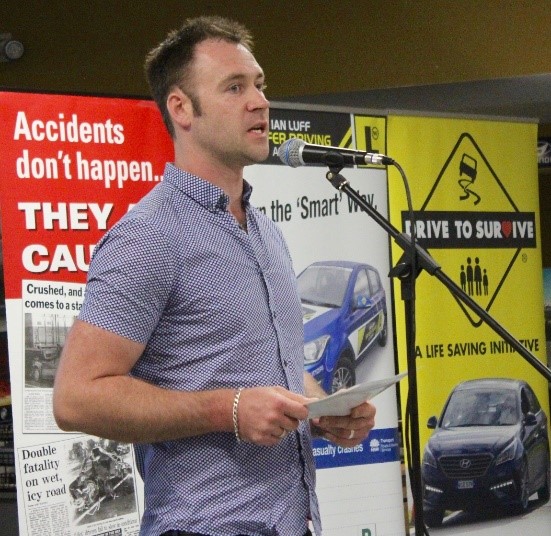 It was a regular weekend, 13 years ago. Jarrad had played football, washed his car and then set off to visit his sister. On this trip and at just 20 years of age, Jarrad’s life changed forever.

Driving 60km/h over the speed limit, his car veered to the wrong side of the road. Jarrad clipped a power pole and collided with a tree.

Jarrad was cut free from his tangled car wreck at the crash site and taken by helicopter to Westmead Hospital. Jarrad had extensive injuries and mid-air, suffered a sudden cardiac arrest.

Jarrad was placed in an induced coma in hospital and spent two weeks in the High Dependency Ward. His parents were told that if he survived, with the injury to his brain he would need 24/7 care for the rest of his life. Jarrad’s parents were heartbroken and prepared for the worst.

But Jarrad beat the odds and survived the riskiest days and weeks. He was transferred to Westmead Hospital’s Brain Injury Unit. Rehabilitation was the next step Jarrad had to take if he wanted to return to living a normal life as soon as possible. Jarrod jumped right in. ‘I dared myself to be the best I could be’, he says with humility but with smile ear to ear.

Jarrad’s journey through recovery was tough both physically and emotionally. Endless hours and exercises spent re-wiring his brain to perform tasks like walking, eating, reading and writing was a challenging and slow process.

Jarrad’s friends grew distant but he doesn’t hold any grudges, ‘There will always be challenges in life, it comes back to how you deal with them that makes the difference’, he explains.

Jarrad’s determination to recover through rehabilitation grew stronger from seeing others around him achieve small goals over long periods of time. Jarrad’s motivation was driven internally and supported by professionals around him. It enabled Jarrad to set his sights further ahead with the mentality of ‘every situation that you’re faced with, that you enter into, is a situation for you to grow from’.

Jarrad encountered social barriers in the community throughout his rehabilitation and found that some people stereotype those with brain injuries. Now, Jarrod uses time in the gym to continue working on improving himself and to strengthen social connections.

Jarrad shines when relaying that family was a pivotal support network in his recovery journey. ‘People are like trees – the leaves on light branches can snap off and fall away, but the people that stay with you forever are your roots’.

At the time of Jarrad’s accident, he was studying to become an apprentice plumber. When he could study again, Jarrad’s father drove him 2 hours across Sydney once a week to TAFE so he could complete his final year with the support of his teachers. This accomplishment saw Jarrad win a major TAFE award that recognised his character and study achievements.

Jarrad began telling his story for groups of young people across Sydney as part of the Think Twice program at Westmead Hosptial and for the NSW Brain Injury Speakers Bureau. Before the accident, Jarrad was shy and didn’t do any public speaking but he is the opposite now. Full of energy, and charisma, he works for Mittagong RSL welcoming the community on their arrival.

Since the accident, Jarrad’s mindset is one of positivity. In 2013 Jarrad became the Ambassador of the Drive to Survive® program. He regularly talks to school students and mature aged drivers about what he went through. He makes no apologies for his hard hitting story, with the hope he will encourage drivers to be safe while driving on the road. Jarrad also tells his motivational story to corporate clients of his determination and the teamwork that helped him get out of Hospital.

Working with motoring expert Ian Luff has helped Jarrad develop his public speaking ability and refine his talks that are designed to inspire or motivate people in their own lives.

Jarrad wants to motivate others, especially men. He wants men no matter what they are going through, to reach out and seek help. ‘There is nothing to be ashamed of, it just means they may need some extra help to get back to strength’.

Jarrod sums up his journey so far with, ‘life is a like a maze with hard turns, and road blocks. You have to accept it and roll with it. I might have limitations, but that won’t stop me’.

Matthew’s story is a part of the Tackling the Challenge Project, a collection of local men’s stories about resilience and recovery. If you have a story to share and would like to know more, contact Brendan Bennett on Brendan.Bennett@health.nsw.gov.au or on 8738 5983. If you need support, call Lifeline: 13 11 14 or the Mental Health Line a 24-hour telephone service: 1800 011 511.