MHIRC has always been an advocate of the social determinants of people’s health, arguing for a balance to be struck between attendance at medical services and environments which support health and well-being. MHIRC has drawn attention to the national tragedy of suicide as affecting the whole population and notably that 3 in 4 deaths by suicide are of men.

We have welcomed many more recent initiatives in suicide prevention but we feel that the approach which needs to be more resolutely adopted is the one proposed by Dr John Ashfield and Mr Anthony Smith: the "Situational Approach" to suicide prevention (opens in a new window) 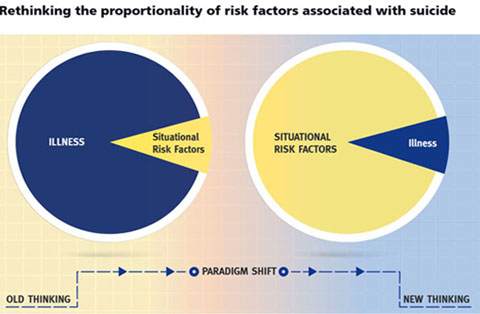 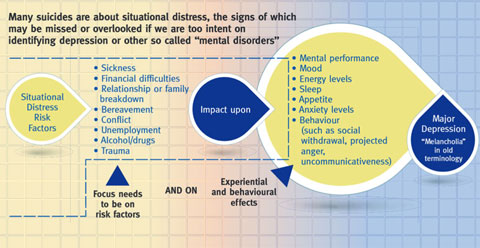 The situational approach to suicide prevention acknowledges the factors which can lead people down what we have called the “pathways to despair”.

The study of male suicide on the Central Coast revealed that the individuals' decisions to end their lives arose from a set of long-standing circumstances and issues that collectively worked to erode their ability to cope with life.  Typically, there was a set of stressors that started a spiral of behaviours and understanding the patterns of these behaviours holds lessons for those working in suicide prevention and intervention.

The paper reveals that these transitions act as tipping points into potentially destructive behaviours - these include:

Many of these “social determinants of suicide” can influence suicidal ideation in people and these need to be addressed. That such a high percentage of suicide deaths are by people not in employment is one indication of the need to address the “situation” of people who take their own lives.

See study of male suicide on the Central Coast: Pathways to Despair: The Social Determinants of Male Suicide (opens in a new window)

MHIRC runs the “Shed” in Mt Druitt as a drop in centre for people (mainly Aboriginal) at risk of suicide and the workers there address the most pressing “situations” of the distressed people attending as a first step in hopefully averting further distress and even suicide.