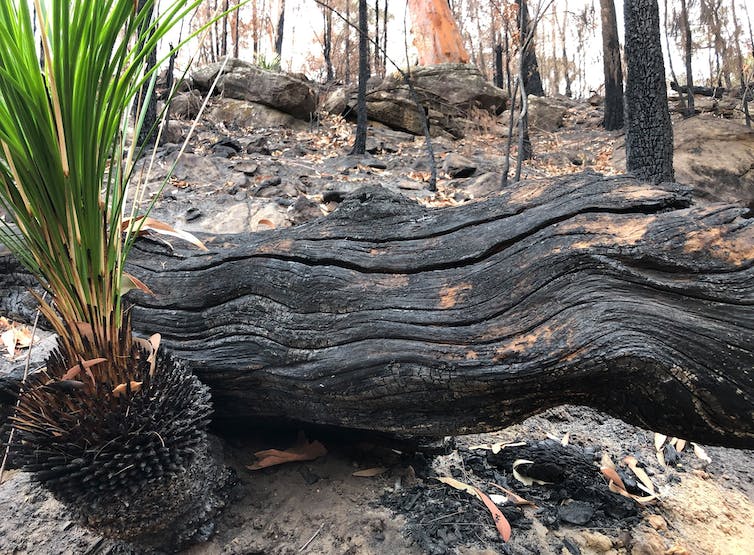 How do you support people forever attached to a landscape after an inferno tears through their homelands: decimating native food sources, burning through ancient scarred trees (opens in a new window)and destroying ancestral and totemic plants and animals?

The fact is, the experience of Aboriginal peoples in the fire crisis engulfing much of Australia is vastly different to non-Indigenous peoples.

Colonial legacies of eradication, dispossession, assimilation and racism continue to impact the lived realities of Aboriginal peoples. Added to this is the widespread exclusion of our peoples from accessing and managing traditional homelands. These factors compound the trauma of these unprecedented fires.

As Australia picks up the pieces from these fires, it’s more important than ever to understand the unique grief (opens in a new window)Aboriginal peoples experience. Only through this understanding can effective strategies be put in place to support our communities to recover.

Aboriginal peoples live with a sense of perpetual grief. It stems from the as-yet-unresolved matter of the invasion and subsequent colonisation of our homelands.

Australian laws have changed to partially return Aboriginal peoples’ lands and waters, and Aboriginal people have made their best efforts to advocate for more effective management of Country. But despite this, the majority of our peoples have been consigned to the margins in managing our homelands.

Aboriginal people have watched on and been ignored as homelands have been mismanaged and neglected (opens in a new window).

Oliver Costello is chief executive of Firesticks Alliance (opens in a new window)an Indigenous-led network that aims to re-invigorate cultural burning. As he puts it:

"Since colonisation, many Indigenous people have been removed from their land, and their cultural fire management practices have been constrained by authorities, informed by Western views of fire and land management."

In this way, settler-colonialism is not historical, but a lived experience. And the growing reality of climate change (opens in a new window)adds to these anxieties.

It’s also important to recognise that our people grieve not only for our communities, but for our non-human relations. Aboriginal peoples’ cultural identity comes from the land (opens in a new window).

As such, Aboriginal cultural lives and livelihoods continue to be tied to the land, including landscape features such as waterholes, valleys and mountains, as well as native animals and plants.

The decimation caused by the fires deeply impacts the existence of Aboriginal peoples and in the most severe hit areas, threatens Aboriginal groups as distinct cultural beings attached to the land. As The Guardian’s Indigenous affairs editor Lorena Allam recently wrote (opens in a new window):

"Like you, I’ve watched in anguish and horror as fire lays waste to precious Yuin land, taking everything with it – lives, homes, animals, trees – but for First Nations people it is also burning up our memories, our sacred places, all the things which make us who we are."

For Aboriginal people then, who live with the trauma of dispossession and neglect and now, the trauma of catastrophic fire, our grief is immeasurably different to that of non-Indigenous people.

As we come to terms with the fires’ devastation, Australia must turn its gaze to recovery. The field of community recovery offers valuable insights into how groups of people can come together and move forward after disasters.

The definition of “community” is not explicitly addressed, and thus is taken as a single socio-cultural group of people.

But research in Australia and overseas has demonstrated that for Aboriginal people, healing from trauma – whether historical or contemporary – is a cultural and spiritual process (opens in a new window)and inherently tied to land.

The culture-neutral standpoint (opens in a new window)in community recovery research as yet does not acknowledge these differences. Without considering the historical, political and cultural contexts that continue to define the lives of Aboriginal peoples, responses to the crisis may be inadequate and inappropriate.

Resilience in the face of ongoing trauma

The long-term effects of colonisation has meant Aboriginal communities are (for better or worse) accustomed to living with catastrophic changes to their societies and lands (opens in a new window), adjusting and adapting to keep functioning.

Experts consider these resilience traits as integral for communities to survive and recover from natural disasters.

This is a salient lesson for agencies and other non-government organisations entrusted to lead the disaster recovery process.

The community characteristics that enable effective and timely community recovery, such as close social links and shared histories, already exist in the Aboriginal communities affected.

The agency (opens in a new window)in charge of leading the recovery in bushfire-affected areas must begin respectfully and appropriately. And they must be equipped with the basic knowledge of our peoples’ different circumstances.

It’s important to note this isn’t “special treatment”. Instead, it recognises that policy and practice must be fit-for-purpose and, at the very least, not do further harm (opens in a new window).

If agencies and non-government organisations responsible for leading the recovery from these fires aren’t well-prepared, they risk inflicting new trauma on Aboriginal communities.

The National Disability Insurance Agency offers an example of how to engage with Aboriginal people in culturally sensitive ways (opens in a new window). This includes thinking about Country, culture and community, and working with each community’s values and customs to establish respectful, trusting relationships.

The new bushfire recovery agency (opens in a new window)must use a similar strategy. This would acknowledge both the historical experiences of Aboriginal peoples and our inherent strengths as communities that have not only survived, but remain connected to our homelands.

In this way, perhaps the bushfire crisis might have some positive longer-term outcomes, opening new doors (opens in a new window)to collaboration with Aboriginal people, drawing on our strengths and values and prioritising our unique interests.