Since 2010, Dr Louise Crabtree has been leading a series of projects researching affordable housing options in Australia in the form of Community Land Trusts (CLTs). Building on the experiences of CLTs in the United States and UK, Louise's team has developed a toolkit to provide the emerging sector in Australia with the resources it needs to implement new affordable housing models in Australia.

The Australian Community Land Trust Manual, which was developed in the first phase of the research, provides useable resources to address the operational, legal and financial issues and decisions facing potential CLTs in the Australian context.

Now in phase 2 of the research and working with 10 partner organisations, the team is tracking three case studies in Victoria and Tasmania: organisations that are now implementing the conceptual material from the manual. The results of this research will enable the team to revise the legal and financial information in the manual, and further develop the decision-making tool that was created as part of a project funded by the Australian Housing and Urban Research Institute (AHURI). The team is also working with lenders to look at what loan products are acceptable, and will add a lending framework to the suite of materials.

With housing affordability becoming an increasingly large problem in Australia, Louise's work is valuably addressing a gap in the sector, especially when it comes to affordable housing options for moderate income earners.

CLTs are organisations that provide ongoing affordable housing and other community benefits, and they are usually set up as private non-profit community organisations. Although they sit within the broader family of community housing providers, CLTs are perhaps unique in their focus on community involvement in or ownership of the organisation, and on balancing the rights of the household with the rights of the broader community or society. Affordable housing provided by CLTs includes resale-restricted home ownership, rental housing, and housing cooperatives.

CLTs have widespread potential in Australia to address affordable housing concerns (especially in relation to home ownership), increase the range of housing tenure options available, foster community development and social capital, and maintain a stock of perpetually affordable housing. Yet Australia has been lagging far behind the United States and UK in their development.

This is partly due to the fact that the 'CLT classic' (the widely-known United States model in which a CLT holds title to land in perpetuity and conveys title to any improvements (e.g. buildings) on that land to the resident who then owns the improvements) is not possible under Australian law, which does not readily allow the separation of title to buildings from title to land.

With a growing community housing sector that is being increasingly seen by government as the growth provider for affordable housing in the future and with organisations wanting to set up CLTs but lacking the knowledge to do so, Louise's team set out to find a solution. As a result they developed two main options: long-term leasehold and shared equity of the entire house and land.

Now, with a number of organisations (both existing and in startup) at the point where they want to implement these models, the team is at the cusp of changes starting to happen as a result of their research. 'I would like to say that we're creating a new housing sector and I'm sure that's what the sector would say is happening,' Louise says. 'But we're just at the start. In 5 years from now I hope to see the real impact of the research, to be at the point where we can say that these housing models now exist in the landscape as a direct result of the work.' 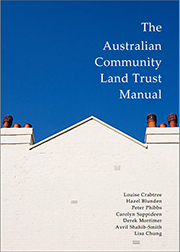 And government is also taking notice. The results of the team's work are now appearing in white papers and policy discussions (for example, a recent Council of Australian Governments (COAG) white paper specifically mentioned the models as a possible option for Aboriginal and Torres Strait Islander communities).

Louise is also a member of working groups that are setting up models of shared equity in NSW and Victoria. Through her involvement in these groups, Louise is able to see how her work is informing and diversifying the housing options.

'The research is informing organisations that aren't calling themselves CLTs but that are diversifying the available housing options, primarily community housing providers that currently only provide rentals. Currently they only provide rentals. The problem is that when people are no longer eligible for the rental housing they have nothing else to move into.'

A common example would be a working family in a community rental who pays a percentage of their income as rent. If a family member is offered a promotion and exceeds the income threshold they have 12 months to find somewhere else to live, yet they cannot afford to buy. Louise explains: 'This is creating disincentives for people to improve their career and also creating a bottle neck because they're staying in the housing and the provider can't bring more people in. The providers are saying "we need another option for people to move into – the next step that people can advance to without having to make the huge jump to market-rate options".'

And the research is addressing other issues as well. Although so far the work has focused primarily on affordability and community benefit, Louise expects two of the current case studies to have a high environmental focus.

'While affordability is the primary issue in Australian housing, another problem is that of housing design not yet across the board having responded well to issues of sustainability,' she says. 'We're starting to see the sector shift but I think there's a lot they could do in terms of prefabricated housing. People are starting to build low cost, modular housing that's designed to be solar passive (catching sunlight) and low impact. It's not only looking at the affordability up front but also how people actually cover their utility costs once they're living in the house, and also making sure that it's built well so it's not just going to fall down in 10 or 20 years' time'.

One of the advantages of having the provider there in perpetuity is that it will encourage them to think differently about housing provision; not just building cheap mass product, but considering how it will perform over time.

An example would be considering whether the housing will remain accessible as people age, considering universal design (design that is accessible to anyone whether they are able-bodied, elderly, or in a wheelchair for instance). Louise explains: 'We need to think differently about housing, looking at it over a longer timeframe and considering social and environmental implications alongside affordability concerns'.

Although historically the housing market has operated on the premise of developers building as cheaply as possible and charging as much as possible for their product, as well as people preferring large houses, Louise is hoping that the sector will shift towards more energy effective and better quality housing.

'It's not just community housing providers but also some developers are stepping into the space,' she says. 'But the affordability needs to be managed as well. A lot of what we have seen is really nice, sustainable housing becoming available, but it's totally top-end product which is absolutely unaffordable to the majority of people, and very much bespoke, individually designed product as well rather than product which is offered part of a standard housing portfolio.'

With all of these developments occurring, it is exciting times ahead for Louise and her team. As organisations begin to implement the team's housing models and with the ongoing research continuing to expand the resources, real changes are starting to happen.

And with the experiences of the United States and UK to draw on, there is plenty of knowledge available. 'There are CLTs in most US states now and the UK sector is growing really fast (close to 200 set up in the last 10 years),' Louise says. 'It has really been the growth of the UK sector that has emboldened the sector here in Australia. When it was just the US people were saying "but that's a very different landscape". Once the UK sector started developing (because that has a similar legal framework and a more similar landscape in terms of housing providers) people began to consider CLTs as an option for Australia.'

'Affordability is becoming more and more of an issue. The sector is realising that this is something that is needed and government is starting to make the same sorts of noises as well.'

Community Land Trusts and Indigenous Communities: From Strategies to Outcomes: