This project aims to promote empowerment and agency to young Australians by developing the concept and practice of 'active citizenship'. This is done by confronting the emerging sense of disempowerment and alienation that many young people feel by developing ongoing work with a cross section of groups that are an important part of the civic landscape. 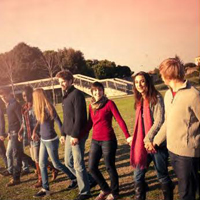 Dr James Arvanitakis and Professor Bob Hodge are researching the concept and practice of active citizenship for young people. This project is funded by the Australian Research Council through its Discovery Projects grant scheme.

‘Many young Australians are feeling an emerging sense of disempowerment and alienation’, says Dr Arvanitakis. ‘They have traditionally been ignored and unable to participate in meaningful ways in society, particularly politically. We need more relevant concepts of citizenship that reflect today’s fluid, multicultural, technologically sophisticated, global world. Young adults need to be engaged in decision-making processes and active participants in society in order to build on what has gone before. Fitting into historical authority structures is no longer appropriate and young adults are very dissatisfied with the major political parties, feeling separate and disinterested in processes for formal government more than ever before. Why not assume they have an immediate role as active citizens instead of “citizens-in-waiting”, to be deemed a citizen by some parochial authority? This project aims to help transform young Australians’ sense of self and inspire them to act effectively to change their world.’

This project will use a series of workshops with leading NGOs and marginalised young Australians from the Western Sydney area to explore the concept of “active citizenship” and becoming a catalyst for change. Themes will be identified and facilitation will encourage participants to define what it means for them to be “active citizens” globally, nationally and in their daily civic lives. Plans of action will then be developed, including resource lists and limitations. These processes will be informed by modern cultural theories and other concepts and theories of transformational change.

Young Australians need to be involved in defining the concept of citizenship and what would help them make positive choices in their growth towards self-reliance and empowerment, as active, engaged citizens. Australian NGOs and a number of government agencies are helping young Australians to engage with the common life of the nation by building on their current multiple allegiances, values and skills. This will strengthen Australia’s socio-political fabric and redefine what it means to live in a truly democratic society.