Opinion: Friday Essay: the Rise of the ‘Bin Chicken’, a Totem for Modern Australia

In just a few decades, the Australian White Ibis (Threskiornis molucca) has made itself at home in many of Australia’s coastal and inland cities. And aside from the feathered birds we see daily (often foraging amongst garbage), representations of ibis have exploded in popular culture. The humble ibis, it seems, has gone viral.

From ibis tattoos to artworks to TV series, this often maligned bird has become a cultural phenomenon, bordering on a national obsession. This ibis juggernaut says a lot about Australian identity and culture in the 21st century - and human-animal relations in a time of environmental threat and uncertainty.

Ibis have entered the Australian English lexicon as “bin chickens”, “tip turkeys”, “sandwich snatchers” and “picnic pirates”, to name just four of their many nicknames. 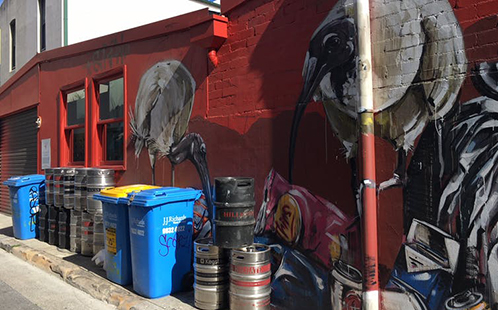 There is a new vogue for ibis tattoos, especially among schoolies(opens in a new window) in Surfers Paradise and nostalgic Australians. And a prototype for an inflatable ibis (opens in a new window) for swimming pools, created by a local designer and advertised as “an Aussie icon”, was crowd funded in early 2018.

Even the Sydney office of Alliance Francaise loves the bin chicken: in a witty 2017 marketing exercise it compared Paris and Sydney and the birds (pigeon and ibis respectively) that symbolised them.

Not everyone loves an ibis. Almost 8000 people registered for the International Glare at Ibises Day (opens in a new window) in Sydney on December 21 2016. This event asked people to “gather in your local park and glare and show general distaste towards Ibises”.

More positively, the “bi” in bin-chicken was also enlisted in support of the same-sex marriage plebiscite (opens in a new window) in 2017 with an ibis-themed dance performance. And the ibis came second in a 2017 vote for Australia’s most popular bird, organised by Birdlife Australia and The Guardian (opens in a new window). (It was pipped at the post by the Australian magpie.)

Ibis now flourish across digital media platforms, where there is a growing list of online pro and anti-ibis films (opens in a new window) and songs.

The expletive-laden Australian Song About Birds by the Van Vuuren Brothers finds the “bin-drinking”, “scabby” and “alien” ibis wanting. The song has had nearly three million YouTube views.

On the other hand, Songtourage’s (opens in a new window) gentle ballad, Song for My Daughter (Who is an Ibis), rejects violent, anti-ibis sentiment.

Australia is clearly embracing its White Ibis with passion, wit, and, in equal measure, affection and disgust. This phenomenon, we argue, has an intriguing environmental, genetic and historical backdrop.

Often dismissed as an introduced vagrant, the Australian White Ibis is one of three ibis species found here (opens in a new window). With that status comes legal protection. Many urban Australians are unhappy to learn about ibis nativity. They want local authorities to remove “immigrant” ibis from their neighbourhoods. Gracius J. Broinowski, The three Australian species of ibis, in The Birds of Australia, 1890. Wikimedia Commons.

A generation ago it was rare to see ibis in Australia’s cities. Now they are thriving on the endless waste our cities provide. Small ibis colonies were established by conservationists in the early 1970s in places like Sydney’s Taronga Zoo and Healesville Sanctuary in Victoria. 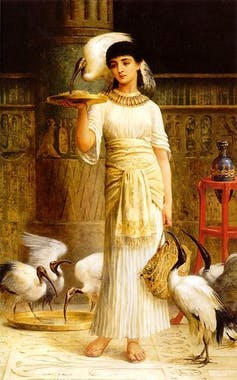 Edwin Long, Alethe Attendant of the Sacred Ibis in the Temple of Isis at Memphis, 1888. Location unknown. Wikimedia commons.

Intriguingly, the migration of ibis from traditional wetlands parallelled changes in scientific thinking about the bird. Between the 1970s and the 1990s, the Australian White Ibis was classified as the Sacred Ibis, the same species worshipped in ancient Egypt as an emblem of Thoth. This God was responsible for maintaining the universe, judging the dead, and overseeing systems of magic, writing and science.

Thoth was often depicted with an ibis head. Because of this association, as Georges Cuvier wrote in 1831, Egyptians let ibis “stray unharmed through their cities”. Sacred Ibis were also mummified; there is a stunning example in the Australian Museum (opens in a new window).

Today, however, the Australian White Ibis is regarded as its own species, close kin of the Sacred Ibis. Many older Australians still refer to our white ibis as sacred. A different order of sacredness inspires Indigenous representations of ibis, an example being ceramic work by the Queensland artist Thanakupi.

The ibis and the artist

In our research (opens in a new window), we have been struck by how Australian artists work with the ibis backstory of sacredness, resilience and survival. These artists are commenting on the urban life and times of ibis, and the bird’s new, precarious, celebrity status.

Clive, Janice and Derek (opens in a new window) are the stars of the 2018 online TV animated series, Bin Chickens. Targets of human rage against ibis as abject and filthy, the trio struggles to survive in Sydney’s overly cemented Darling Harbour. In vain they also try to recover their lost God-head status. The series, funded by Screen Australia and the ABC, is a sardonic sendup of rampant urban development and its ecological costs. The first episode (opens in a new window) alone has had more than 30,000 viewers.

Australian artists also regard ibis as a bellwether species that makes links between habitat loss, climate change and excess human consumption. Sydney-based Linden Braye literally channelled ibis when foraging for waste, and sending up human wastefulness, in her 2016 film, Ibis (opens in a new window).

One artistic response to ibis has attracted millions of viewers across social media platforms: the 2017 mockumentary, Planet Earth: Bin Chicken (opens in a new window), directed and produced by David Johns and Matt Eastwood. The film parodies the David Attenborough wildlife documentary, in which animals rarely live alongside humans.

Planet Earth: Bin Chicken cleverly shows how urban ibis challenge the myth of a city-wilderness divide. Here, moreover, urban Australia is facing a deadly rubbish overload. The winner in this tale of ecological ruin and over-consumption is the ibis, shown god-like at the film’s end as the new overlord of Planet Bin Chicken.

All this ibis anthropomorphism raises questions about how we interpret new human-animal relations in the Anthropocene: the current geological epoch forged by humans and our devastating environmental impact. The ibis is not alone among animals across the world that are adapting to life beside humans. But few species attract human attentions as ibis now do in Australia.

Ibis seem to have supplanted other once iconic species in the Australian imagination. Despite the plight of many koala populations due to deforestation, especially in Queensland, that animal is not featuring in our everyday cultural debates.

And the red kangaroo and emu of the national crest are also being overlooked, even in a time of severe drought that is now depleting inland populations.

The Australian White Ibis is a native bird that is on the move. Ibis remind us everyday of the environmental challenges we all face. Their tenacity and fearlessness as environmental refugees mean that they attract intense visceral rejections and groundswells of affection alike.

Ibis have infiltrated our daily speech and our cultural consciousness. Indeed the ibis is fast becoming the new animal totem for thinking about the very idea of “Australia” today.

This opinion piece co-authored by Dr Andrea Connor and Associate Professor Paul Allatson was first published with full links in The Conversation (opens in a new window).