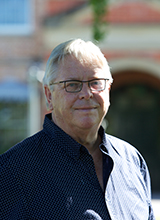 Dr Michael Volkerling died suddenly on 13 June, 2014 in Sydney. Michael worked with the University of Western Sydney's Institute for Culture and Society since 2011, in a variety of roles including adjunct researcher and Principal Research Fellow. At ICS he was greatly respected and much admired for his cultural policy expertise, and his sustained publication record in cultural policy studies. Michael had been working on a number of current projects at ICS.