At the end of 2014, Distinguished Professor Ien Ang, steps down from the position of ICS Director, and hands the position over to Professor Paul James who will commence as Director on 1 January 2015.

Ien joined the University of Western Sydney in 1996 as Professor of Cultural Studies and has made a huge, long-term contribution to the Institute and its preceding entities as Founding Director.

On 11 December, ICS held a morning tea to farewell Ien from the position and to thank her for her contribution.

Below: Dr Zoe Sofoulis speaking at the morning tea and Ien with her flowers. 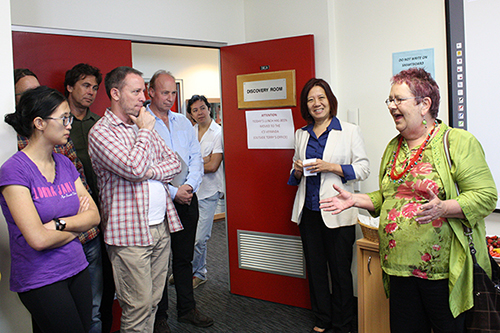 Reflecting on her time as ICS Director, Ien had the following end of year/farewell message for Institute members.

I am stepping down as Director with a mixture of satisfaction, gratitude, and relief. No, not with regret, as I feel strongly that it's time for someone else to take over. I am therefore extremely pleased that we found in Paul James a wonderfully energetic and intellectually imaginative new director. I am sure that with Paul at the helm, ICS will achieve new heights of success.

I'd like to thank everyone – senior colleagues and junior research staff, research support staff, professional staff, students industry partners, and other supporters - who has contributed to making ICS the stimulating, productive, and well-run place it is. The success of an Institute such as ICS does not depend on the achievements of individuals in isolation (though of course we celebrate individual successes whenever they happen), but on the 'ecology' of everyone working together in the common interest of the Institute as a whole. This is certainly one of the most important things I have learned in all the years I have been Director.

The key role of Institute Director is that of institution building – creating a conducive environment for researchers to thrive in a context with complex external pressures and internal imperatives. This is especially the case for us in the Humanities and Social Sciences. We will always have to keep in mind that we will be judged by a lot of others who don't always understand or appreciate the kind of work we do. But being mindful of this also has advantages: it leads us to think harder about how our research can speak to, connect with, or respond to the interests of broader constituencies other than our own. This is the basis of ICS's philosophy of 'engaged research', which I know Paul will push further than we have done so far.

Being a Director also comes with great opportunities and pleasures. The building up of ICS has coincided with the gradual maturing of UWS as a research university (a process which is still ongoing), and having had the chance to work on the creation of a research environment as fresh and innovative as ICS has certainly been one of the highlights of my career. So in closing, here are some points I wish to share with you in considering the requirements of directing an Institute, as I have learned:

I wish you all a peaceful and work-free festive season, and an invigorating start of 2015.

Below: a selection of photos from 2006 onwards.

As part of the Stories Then and Now theatre work, Ien told her life journey through the three very different cultures of Indonesia, the Netherlands and Australia. Her story, 'The long way home', aired on ABC Radio National on 23 November. The audio is available on the ABC website (opens in a new window).