James Arvanitakis' latest piece is an essay for the opening of the Chen Ping exhibition Complex Emotions, 20 September - 5 October 2012, at Art Equity (opens in a new window). 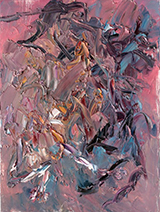 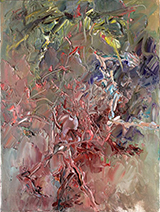 Another important contradiction is that the latest technologies, while promising to make our lives easier, often work to obscure what is important: we check our smart phones for emails over dinner, or interrupt our lazy Sunday mornings to write that message that should wait until Monday.

It is such contradictions that can be seen to create the malaise of the contemporary period: as one dimension of life offers certainty, then its opposite simultaneously emerges.

Both contemporary philosophers, such as Edward de Botton and Ronald Wright, and more classical philosophers including Thorstien Veblen and Max Weber, identify such contradictions. Included here is the idea that the world offers us so much beauty but we become focussed on petty concerns: from status anxiety to chasing the latest gadgets.

Staring at Cheng Ping's ethereal paintings these contradictions emerge. The works are created by an artist that has a deep understanding of the universal language of paint. While one part of the artwork is busy, congested, verging on the exhausting, the other part is composed, open, calm and contemplative. They are neither purely abstract nor classical; they cannot be identified as either East or West; they are not portraits or landscapes depicting neither the unadulterated human nor uncontaminated nature.

Rather, they are a fusion of all these dimensions bringing together aspects of each.

Staring at Ping's paintings one identifies with the figures: simultaneously recognisable but abstract; isolated from the environment and the natural world, while also part of it.

As you walk through the layers, you identify that the figure captures the modern condition I discussed above: the contradictions of contemporary life emerge.

It is this simultaneous connection and disconnection between the natural world and humanity that Ping identifies as a key motivational factor in his work. Nature here is not something that is 'over there', but something that should be understood to be here, around us: precariously placed in the Tasmanian mountains, the Australian outback, the Himalayas, the large urban centres that the majority of the world's population now live in and even the art galleries which hang such works.

This is one of the key messages that emerge in Ping's work: we might think that we can disconnect ourselves from the world with all the modern technologies, but the quality of our lives depend on the quality of the world around us. We should break through this disconnection: even while standing here, in the gallery.

The controversial German philosopher from the twentieth century, Martin Heidegger, discusses the concept of the 'threshold': what he is describing here is the moment we move from a state of ignorance to one of reflection. This is the point when we look around and see the world with fresh eyes and identify what is most important, what really makes us human, and the importance of the relationships we build.

Once we cross this threshold, the world is different: more beautiful, intense, full of increasing insight and emotions. We can go back, but once through, there is always the possibility of returning.

It is this point that such works take us to: they show the world in a different way.

It is this place that they seize.