Young people from across Australia have had their voices heard at a national forum exploring democracy and the media at the Museum of Australian Democracy (MoAD) in Canberra. 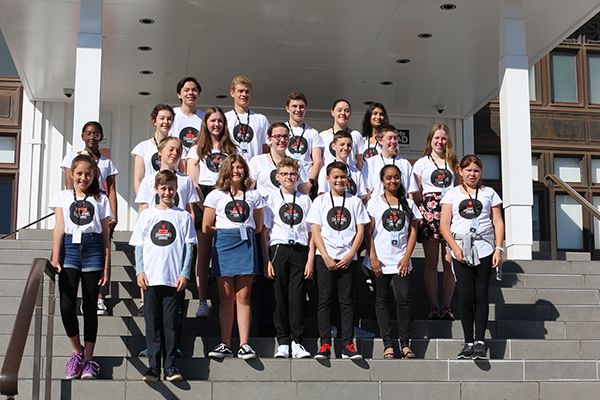 Held during National Media Literacy Week, the two-day News Media Literacy Forum saw twenty-one students aged 10-17 come together to discuss the future of news media and train to be News Champions, equipped to lead discussions and engage with news in their local communities. The students also developed questions to contribute to a national news poll for young Australians to be completed in early 2020.

Enoch Strickland, a 16-year-old from Alice Springs, said he wanted to take part in the forum so that the media would “listen to young people’s voices and opinions" and so he would "be able to have input into the big-picture decisions about the future of media.”

Zoe Adams, a 15-year old from Hobart, said she hopes news can "provide more opportunities for young people to become involved in politics."

The forum was part of the Advancing the Media Literacy of Young Australians research project (opens in a new window), led by Dr Tanya Notley from Western Sydney University and Associate Professor Michael Dezuanni from Queensland University of Technology. Co-organiser Dr Tanya Notley from Western Sydney University’s Institute for Culture and Society and School of Humanities and Communication Arts said: “The forum focused on how young people can improve the quality and diversity of news in Australia.”

“It builds on our research which has found that young people have very low levels of trust in news media, while they are also largely ignored by news media organisations.”

Co-organiser Associate Professor Michael Dezuanni from Queensland University of Technology said: “It is critical that young people are engaged in ongoing national discussions about the future of news media including issues relating to how news should be funded and regulated.”

Co-organiser MJ Logan from the Museum of Australian Democracy said: “Young people have voices that need to be heard. One way we can ensure they are heard is by supporting their engagement with news media.”

Developed in partnership with MoAD, Western Sydney University, Queensland University of Technology, ABC Education and Google Australia, data from the forum will be featured in an upcoming exhibition at MoAD. The exhibition, Truth, Power and a Free Press, will explore why journalists do the work they do, examining the ongoing battle for truth and representation in the media. It opens on 15 November 2019.