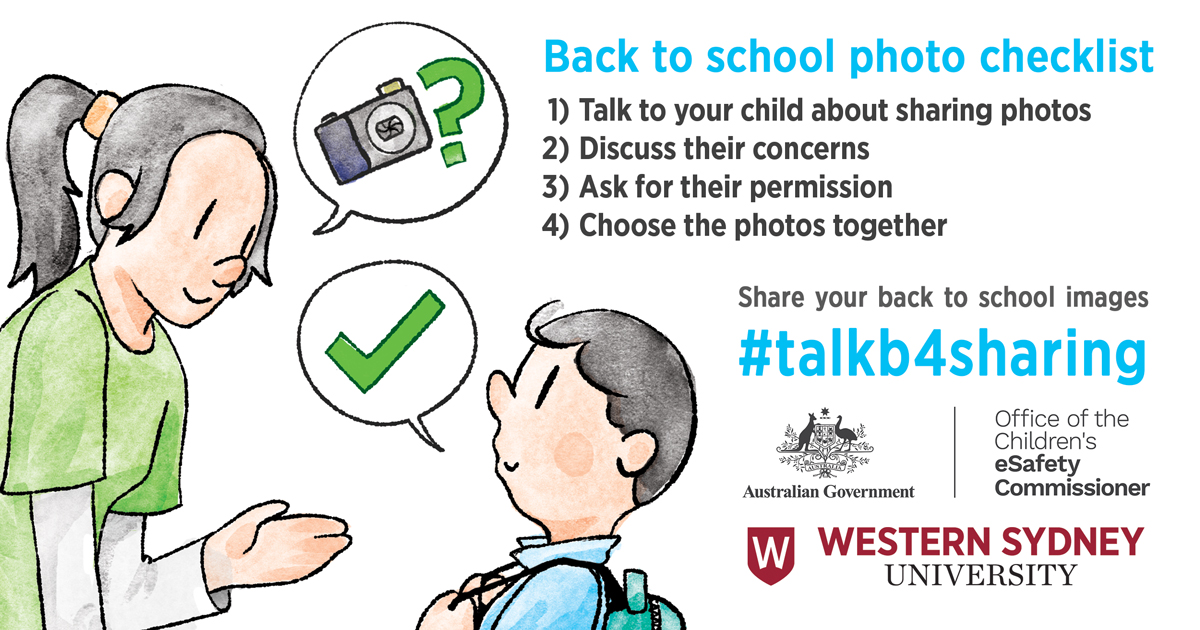 Digital safety experts from the Office of the Children's eSafety Commissioner and the Institute for Culture and Society have partnered in an education initiative urging parents to talk to their children before posting their back to school images online.

Sharing photos of their children starting school on social media is an important digital ritual for Australian families, but raises concerns for many parents around online safety and whether they have the moral right to share pictures of minors.

Children's eSafety Commissioner Julie Inman Grant, in partnership with Amanda Third from the Institute for Culture and Society, is encouraging parents to use the hashtag #talkb4sharing when posting photos of children.

"As children return to school every year, there's a debate about whether or not parents have the right to post their children's images online," says Associate Professor Third.

"We believe it's the perfect opportunity for parents to have a conversation with their kids—the sort of conversation that needs to happen early and often to encourage digital literacy," says Inman Grant.

"That's why as the school year starts we're asking parents to talk through these issues with their children, and tag any posts with #talkb4sharing to encourage other people to do the same."

Associate Professor Third says rather than stopping the ritual, parents should use the opportunity to talk with their children about what they plan to do with the image, where it will go, and who will see it.

"What's important is that families talk about digital issues like image sharing so that children can learn about what it means to be online, from an early age," says Associate Professor Third.

"It's an important step in building children's digital literacy and enabling them to learn how to be safe online, but also how to maximise the benefits of their digital engagements."

The #talkb4sharing initiative started as a conversation between Inman Grant and Associate Professor Third, who both have children starting school for the first time in 2017.

"In the digital age, it can be confusing for parents who want to share images of their children with family and friends on social media, but also want do what's best for their child," says Inman Grant.

"Our hope is that parents think about these issues, take on board sound advice, and start to have conversations with their children as a stepping stone toward digital literacy."

Through the #talkb4sharing initiative, the Office of the Children's eSafety Commissioner and the Institute for Culture and Society at Western Sydney University are encouraging parents to talk to their children about how and why they share their children's back-to-school photos online.