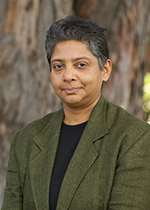 ICS researcher Dr Yasmin Tambiah has won first place in ZineWest 2013, a publication and competition for emerging Western Sydney writers co-sponsored by NEW Writer's Group Inc and the Writing and Society Research Centre at the University of Western Sydney.

Yasmin's piece, A Shore Distant was announced as the winner of the 'best prose' category during the award ceremony on 12 October.

The 257-word prose explores the story of a woman of later years displaced from her community.