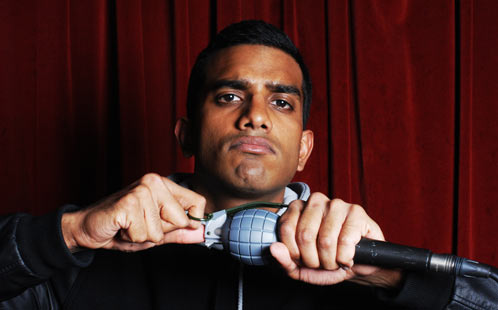 The power of music and comedy to cut through public sensitivities and stand up to racism will be discussed at the latest Sydney Seminar, organised by the University of Western Sydney.

Award winning comedian and one half of comedy duo Fear of a Brown Planet, Aamer Rahman, and author of Black Star, Crescent Moon: The Muslim International and Black Freedom Beyond America, Associate Professor Sohail Daulatzai from the University of California Irvine, are special guests for the Sydney Seminar: Race and the Politics of Performance, held at the NSW State Library on December 2 at 6pm.

The seminar will be chaired by Professor Suvendrini Perera, from Curtin University, whose groundbreaking work on the politics of borders in Australia has been central to thinking about how race continues to create insiders and outsiders despite official commitments to multiculturalism.

Organiser, ICS's Associate Professor Alana Lentin (opens in a new window), says hip hop and critical stand-up comedy are spaces in which caustic criticisms of the violence of race have constantly been held up to scrutiny.

"It is never easy to talk about race, much less the systemic racism we see every day in the age of the global 'war on terror'," says Associate Professor Lentin.

"This unique event brings together an analyst of the world of hip hop with a comedian known for his unflinching political and racial commentary to discuss how art and activism cross over as black and minority ethnic performers resist dominant cultural frames."

"Together they will examine expressions of racial resistance and cultural and political critiques in the contemporary Australian political and cultural landscapes from which racialised voices are most often excluded."

'Race and the Politics of Performance' is the inaugural event in the Sydney Seminar for Culture and Society. An initiative of the Institute for Culture and Society at the University of Western Sydney, this occasional series of public seminars will bring to Sydney high profile speakers to reflect upon pressing issues and challenges confronting today's culture, politics and society