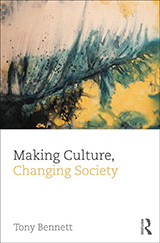 This book proposes a challenging new account of the relations between culture and society focused on how particular forms of cultural knowledge and expertise work on, order and transform society. Examining these forms of culture’s action on the social as aspects of a historically distinctive ensemble of cultural institutions, it considers the diverse ways in which culture has been produced and mobilised as a resource for governing populations.

These concerns are illustrated in detailed case studies of how anthropological conceptions of the relations between race and culture have shaped – and been shaped by – the relationships between museums, fieldwork and governmental programmes in early twentieth-century France and Australia. These are complemented by a closely argued account of the relations between aesthetics and governance that, in contrast to conventional approaches, interprets the historical emergence of the autonomy of the aesthetic as vastly expanding the range of art’s social uses.

In pursuing these concerns, particular attention is given to the role that the cultural disciplines have played in making up and distributing the freedoms through which modern forms of liberal government operate. An examination of the place that has been accorded habit as a route into the regulation of conduct within liberal social, cultural and political thought brings these questions into sharp focus. The book will be of interest to students and scholars of sociology, cultural studies, media studies, anthropology, museum and heritage studies, history, art history and cultural policy studies.

Further information on this book is available on the Routledge website (opens in a new window).