ICS members have been busy over the last couple of months, engaged in a variety of activities within Australia and overseas. Here is a summary of the latest activities. 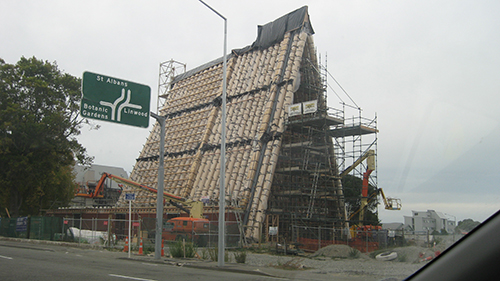 Above: the Transitional 'Cardboard' Cathedral (opens in a new window)Project in Christchurch, New Zealand - Shigeru Ban's Emergency Architecture. Photo taken by Professor Katherine Gibson on her recent visit to the city.

On 18 April, Professor Ien Ang will give a public lecture at the University of Melbourne on 'Precariously at Home: Chinatown in Sydney, Australia in Asia' (opens in a new window).

Professor Donald McNeill is on fieldwork in San Francisco and Silicon Valley until 1 May. He is also presenting his work on IBM and 'smart cities' at the Urban Affairs Association and Association of American Geographers conferences, and at a symposium at UC Berkeley's Center for Science, Technology, Medicine and Society, during this time.

Professor Katherine Gibson attended the annual meetings of the Association of American Geographers in Los Angeles from April 9-13 and participated in five sessions organised around her new co-authored book Take back the economy: an ethical guide for transforming our communities which will be published by the University of Minnesota Press in May.

Katherine will also be participating in an Author Meets the Critics session around a new book Value in Marx, by George Henderson.

From 11-15 March Katherine was a New Zealand Geographical Society Distinguished Visiting Fellow. She spent a week at the University of Canterbury in Christchurch, New Zealand, where she delivered:

She was taken on a tour of Christchurch's red zone and was able to view many of the new urban experiments 'filling the gaps' left by demolition of earthquake affected properties. Above: The Summer Pallet Pavilion, a transitional architecture Gap Filler project that functions as a community space and venue for events. Gap Filler (opens in a new window)is a creative urban regeneration initiative aiming to temporarily activate vacant sites within Christchurch with creative projects for community benefit, to make for a more interesting, dynamic and vibrant city. Below: The Re:START Cashel Mall in Christchurch, which houses retailers in shipping containers. 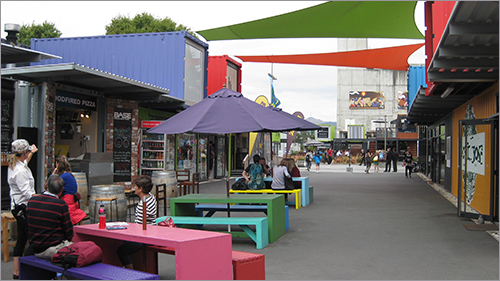 Professor Kay Anderson presented the annual lecture for the journal Cultural Geographies at the annual meeting of the Association of American Geographers on 12 April in Los Angeles. Kay's lecture was titled 'Mind over Matter? On Decentring the Human in Human Geography'.

On 4 April Professor James Arvanitakis spoke at the Greek Community of Melbourne's Antipodes Festival on 'The future of education: virtual universities in a virtual world?'.

On 21 March, the National Drug Law Enforcement Research Fund report on Patron Offending and Intoxication in Night-Time Entertainment Districts (POINTED) was released. Professor Stephen Tomsen and HDR student Phillip Wadds were two of the authors of this report. The POINTED project interviewed almost 7000 patrons between November 2011 and June 2012, and conducted almost 900 hours of observation of patrons in pubs and clubs.

The Institute for Culture and Society is a local partner organisation and Dr George Morgan is the local organiser of an international workshop: Higher Education, Creative Engagement and the Creative Economy: the Australia Experience. This workshop will be held at UWS on 12 July 2013.