Moving Around the Lanterns

For the past three years I have observed the Sydney Chinese New Year Festival – the biggest of its kind outside China – with a particular eye on the possibility to frame it as a moment of intensification of the brand of the Chinatown/Haymarket precinct; this is usually referred to in the ‘City of Villages’ project sponsored by the City of Sydney as ‘a multi-Asian taste carnival’. By attending the activities organised to welcome the Year of the Monkey at the weekend, the main point that can be made about this year’s celebrations is that the changing assemblage of urban spaces activated for the occasion and the prominence of art-related activities included in the Festival program have increasingly expanded the reach of the Chinese New Year as well as opened new windows to observe its role as a city-wide event.

In stark contrast with the past, the celebrations this year will not be characterised by the iconic Twilight Parade – the choreographic carousel along George Street ending in proximity to the Chinatown precinct – due to the closing of the CBD’s main artery and the ongoing road works for the expansion of the light rail system. The redevelopment of the entertainment centre into mixed-use development and part of a $3.4 billion revitalisation of Darling Harbour also forced the organising committee to look at other parts of the city for the unfolding of the celebrations. For the first time, the event will not be concentrated in the lower end of George Street. The centrepiece of this year’s Festival are 12 Lanterns representing the signs of the lunar zodiac scattered throughout a range of locations from Circular Quay to Martin Place, from Pitt Street to Queen Victoria Building. These create an illuminated pathway across the city that bypasses any notion of ‘symbolic centre’. The transition from one lantern to the other is aided by the connections between different parts of the CBD such as underground passages, broadened footpaths, beautified laneways and pedestrian malls. The Year of the Monkey is celebrated in an exciting urban labyrinth defined less by pre-determined pathways, and connected more to the multiplication of the stages for the performance of a wide range of actors that frame the quest for the lanterns. Street buskers, fortune tellers, urban strollers, dead-end streets, traditional markets, construction sites, red lanterns, hidden corners, and lion dancers are part of a type of ‘city-making’ that composes this year’s celebrations, one that dilutes multi-Asianness into the culturally hybrid and transforming Sydney urban fabric. The Festival, in other words, seems to be growing not only within the city, but with the city itself. The predominance of art-related initiatives and performances is another issue worth noticing. Part of the celebrations in fact takes place in the newly established Kensington Street in Chippendale, recently rebranded as a ‘creative’ precinct. Here, the activities include visits to local designers’ workshops, art exhibitions in old warehouses, and food demonstrations in Spice Lane – a narrow laneway at the back of a row of terrace houses, where street food stalls are lined up. Furthermore, the launch party of the Festival at Dawes Point – featuring spectacular dance acts performed by professional crews, live music and a beautiful firework show framed by the Sydney Harbour – has taken the place of a more ‘modest’ celebration in Belmore Park, which also featured amateur performances of community groups coordinated by a Chinatown-based Chinese cultural organisation. The increasing professionalisation of the Festival can therefore be read as a limit to the participation within the community circles.

The trademark of this year’s celebrations, in other words, is the quality of the performances, together with the playfulness of the installations and their conversation with the urban fabric. On my way to Circular Quay in order to complete the tour of the lanterns, I walked underneath a line of giant rabbits frozen in the same tai chi circle form, whereas a few metres from the stage of the launch party I was ‘attacked’ by a squad of little monkey dancers, who were greeting the attendees with the typical cheeky, fun, loving, inquisitive and wise attitude that characterises this sign. As the sun went down on the Harbour and the haze of the fireworks was blown away from the breeze of a pleasant summer night, the Opera House and the Harbour Bridge were lit up in red (so will be the Town Hall building throughout the whole duration of the Festival) as a proof of the symbolic relevance that the Chinese New Year has reached.

The de-centreing of the ‘stage’ of the performances, the prominence given to the artistic component, the intra-precinct collaboration in the organisation of the events, and the increasing sophistication of the celebrations pose interesting questions related to how changing assemblages activated during the Chinese New Year impact the ‘community’ as an integral component of the event. The Festival is marked by an increasingly ambiguous Asian-Australianness taking place in a vibrant and dynamically transforming urban Sydneyness; a celebration, the meaning of which remains unclear and that possibly makes of this very exciting ambiguity its own capacity to grow year after year. 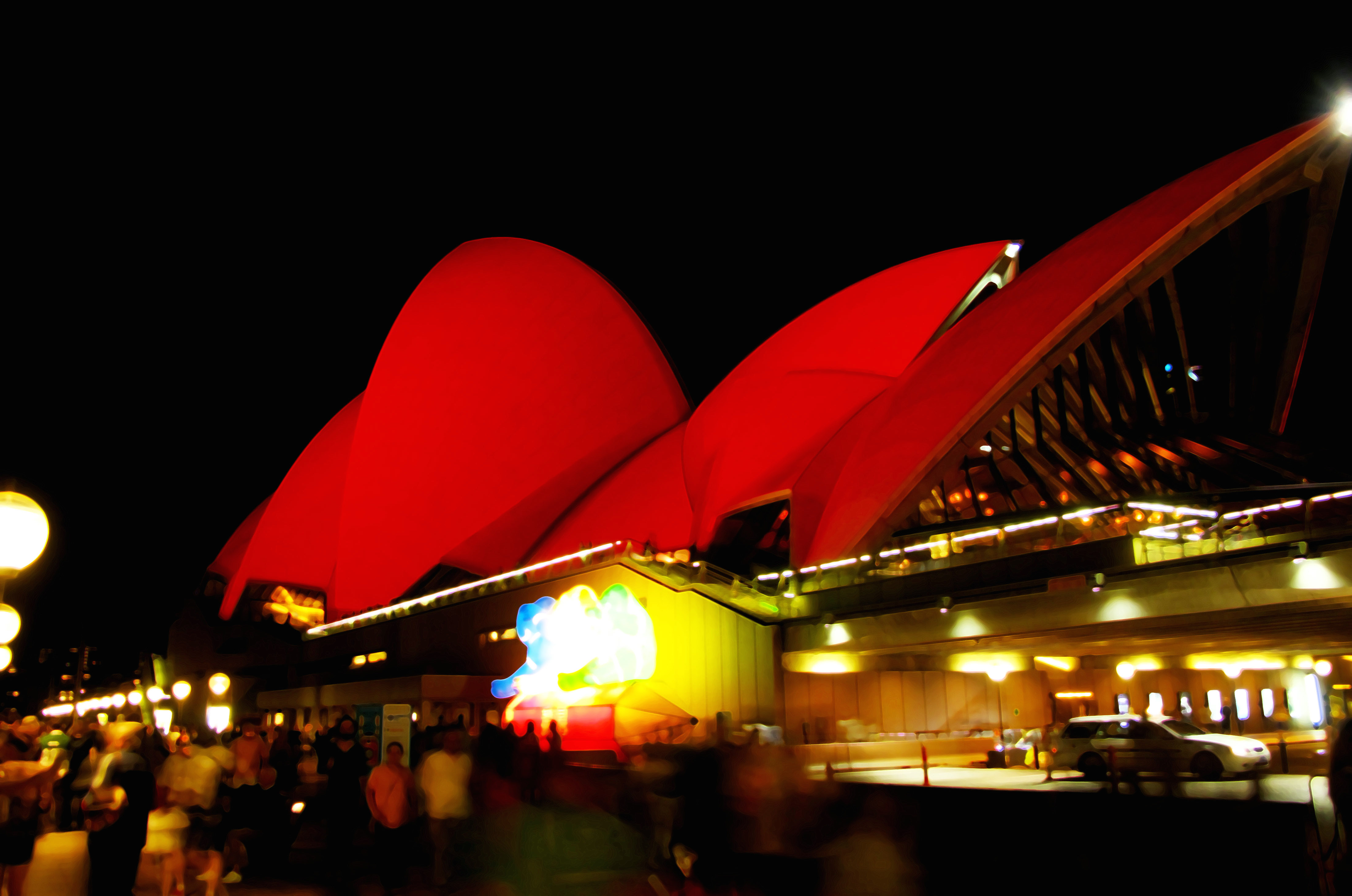 Above: The Monkey’s lantern underneath the Opera House symbolises a de-stabilised centre of the Chinese New Year.

Andrea Del Bono is a PhD candidate at the Institute for Culture and society. His research looks at place branding as a platform of contested meanings that offers new insights into the conceptualisation of ‘ethnicity and the city’.