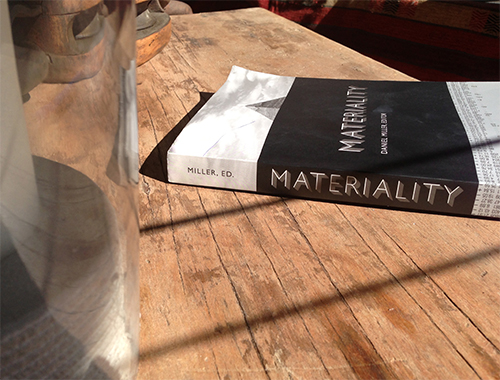 From British television’s Time Team to the intellectual trends of academia, from the pedagogical capacity of a pen, to the molecular structure of stone, these were but a few of the topics raised during the Material Culture Reading group’s first gathering this past Tuesday evening, 30 April 2013. Thirteen people convened over wine and pizza to discover what overlaps and insights their diverse backgrounds and research interests might collectively bring to issues of material culture. The expertise of the group included pedagogy, history, cultural research, heritage studies, conservation, archaeology, political science, community arts, and the anthropocene. Attendees came from both ICS and beyond and included staff from the NSW Office of Environment and Heritage. While the conversation was oriented by Daniel Miller’s Introduction to his edited volume Materiality, discussion was not limited to the text. Questions were raised such as: What does the theme of materiality bring to our collective disciplines and how can we read its emergence within the larger contextual history of scholarship? Does the concept of agency as proposed in anthropology and material culture studies alter our engagement with the world and if so at what levels? And are these theoretical investigations ultimately useful, if so, for whom and to what ends? The evening began with the group interrogating the solidity of claims by the humanities and social sciences of a material turn. The material, it was agreed, has always been present and influential in producing the social, and many disciplines have long been devoted to the study of things. However, it was also conceded that some of these disciplines lacked a theoretical rigour in conceptualising the material beyond its existence as physical objects in contradistinction to social (human) subjects. One member suggested that the emergence of an affective turn in archaeology holds potential in this regard. The conversation progressed to how the decentering of the human could refocus our analyses of nature, animals, and the non-human and recalibrate debates around environmental sustainability. Extrapolating from these intellectual turns and reconfigurations of the social, considerations of materiality dissolved into abstraction as the group speculated on what lies beyond the anthropocene and the new frontiers in academia beyond critique.  Pass me a slice of that assembled tangible pizza would you? It is phase changing from soft to hard mozzarella and hard to soggy crust and I am hungry. The group will reconvene late May. An announcement will be posted. All are welcome.