Keeping Score: The Sociology of Sport and Media

For many years, sociologists mostly shied away from analysing sport in much the same way as they avoided any deep engagement with other forms of popular culture such as television. Everyday pleasures, it seemed, were too light and epiphenomenal to contend with the big structural themes of the discipline. Gradually, the sheer cultural weight and existential presence of popular texts and practices made this intellectual position untenable. The influence of interdisciplinary fields, especially of cultural studies and media studies – and, it must be said, the siren cry of relevance and meeting students where they stood – also made a mark on a discipline that, after the radical moment of the 'sixties and early  'seventies, had become a little fusty.

The convergence of sport and the world's most popular domestic leisure practice, television viewing,  was especially important. The sociology of media's focus on television had found in sport an integral element of its content, while the sociology of sport could not ignore television's highly efficient conveyance  of sport straight to the domestic hearth. Indeed, the eminent cultural theorist and TV critic Raymond  Williams (1989) observed that sport provided one of the few good reasons to watch television.

When the entire 'media sports cultural complex' (as I call it)—also encompassing newspapers,  magazines, radio, film, internet and games—is taken into account, sport can be said to have colonised  many corners of contemporary culture. Sports metaphors in advertising, business and politics abound,  surreptitiously suggesting that all life can be reduced to contests, rules, wins, losses, and heroic/demonic  performances. Multiple media platforms carry sport constantly, and sometimes to spectacular global  effect, as in the case of the Olympic Games and the Summer World Cup. Without it, the television  industry would be in freefall. 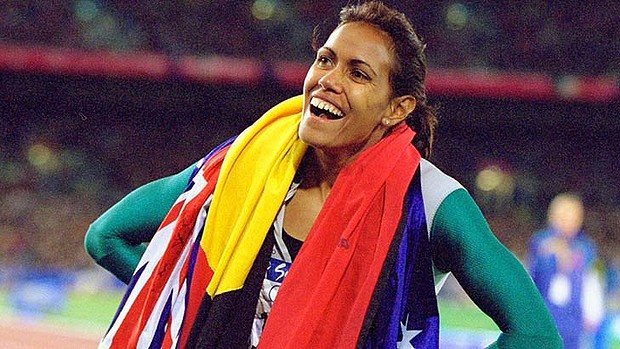 Above: Indigenous Australian athlete Cathy Freeman carrying both the Australian and Aboriginal flag at the 2000 Olympic Games in Sydney, Australia.

It is not surprising, therefore, that media has been a key focus area in the sociology of sport. When  Jon Dart (2014) did a content analysis spanning 25 years of the main journals publishing sociology of  sport (International Review for the Sociology of Sport, Journal of Sport and Social Issues and Sociology of  Sport Journal), he found that media featured heavily among its themes and topics:

There is a broad consensus in the main themes with a very similar 'top 10' across the three journals. What is noticeable is that all the core sociological concepts ('usual suspects') feature prominently: that is, gender [coded here separately as sex/sexuality, feminism and masculinity ], race/ethnicity, education, media, politics and economy and globalisation . Class also features but less frequently. There is limited identification of other core sociological concepts, including religion, the family, the environment, and work/employment. (Dart, 2014: 652).

When the International Review for the Sociology of Sport (2015) produced a 50th anniversary special issue 'assessing the trajectory and challenges' of the sub-discipline, the subject of the media was prominent. This is hardly a surprise, because without the media sport would be largely confined to aficionados performing or watching a cultural practice in a limited range of spaces at set times. The media —especially electronic—have made sport everybody's business, willingly or otherwise. For example,  how many people who'd never heard of Sepp Blatter and have no idea what the acronym FIFA stands for, now know more than they could have imagined about the political economy and governance of association football (soccer)? The reason is that the news media forcibly educated them on the subject during a period of saturation coverage in mid-2015.

Media and sport are two institutional products of modernity that have progressively intertwined —to the extent that Lawrence Wenner (1998) has offered us the neologism 'mediasport'. By the same  token, changes in one part of this 'zone' resonate across all of it, through a series of feedback loops. For  example, if sport associations, clubs and athletes change their modes of presentation through attention-grabbing behaviour and commercially-oriented display, the media both carry and reinforce the  change. Similarly, if the media environment shifts towards 'social' as opposed to institutional media,  sports are required to accommodate the change, both in terms of 'citizen journalists' recording player  transgressions and by exploiting new possibilities for connecting with sport fans.

But, as noted above, these are not matters of exclusive interest for a self-enclosed mediasport world.  They have important consequences across all of society and culture, offering powerful 'instruction'  on class relations (not least through an abiding love of individualistic 'rags to riches' narratives); the  gender order (with its persistent constructions of sporting masculinity in opposition to femininity);  racial and ethnic power (the common ascription of biologistic and culturally essentialist characteris tics); sexual identity (through its largely unexamined heteronormativity); nation-state boundary maintenance (sporting celebration of a nation); globalisation and transnationalism (sporting transcendence  of nation); humanity and technology (the genetically and pharmacologically enhanced cyborg-athlete),  and so on. Close attention to mediasport reveals abundant ways in which the popular–political can be  mobilised and contested.

Sociologists do not have a responsibility to savour sport and its mediated manifestations any more  than they should be required to embrace the aesthetics of 'reality' television and Hollywood film or the  speculative art of gambling. Sport fandom is optional. But it is difficult to negotiate quotidian life and  to understand the socio-cultural power of popular culture without at least a working knowledge of the  discourses of power and pleasure that find in sport a readymade vehicle for their taken-for-granted,  apparently innocuous and naturalised 'truths'. It took sociology a while to grasp the opportunity fully,  but there are rich analytical pickings in every sport news bulletin, live broadcast and online forum.

This piece was original published as part of a feature on the sociology of sport in Nexus, the newsletter of The Australian Sociological Association (vol. 27, no. 2).