The 3rd International Conference on Social Enterprise in Asia

HDR candidate Isaac Lyne blogs about his recent trip to South Korea for the 3rd International Conference on Social Enterprise in Asia.

My first visit to South Korea has proven to be incredibly valuable. In some respects it has felt long overdue and I hope this has been the first of several visits in the years ahead. For the past two years I have studied the emergence of the social economy in particular events leading to the 2007 Social Enterprise Promotion Act in South Korea as a means to understanding better the potential emergence of social enterprise from the grassroots upwards in Cambodia where I have lived and worked since 2009. For the past 3 years I have also networked with people at the Korean Embassy and in particular at the Korea Trade Promotion Corporation in Cambodia, gaining input especially into the establishment of the National Social Enterprise Conference of Cambodia (opens in a new window)since 2011. Last year at the June 2013 European Social Enterprise Research Network (EMES) symposium in Belgium, I was lucky to see presentations from a number of delegates from South Korea. I also managed to bring one of these delegates to the 3rd National Conference in October 2013 to facilitate a workshop on policy issues in the social economy. This was workshop was identified to be of specific importance by Cambodian academics in the preparatory activities leading up to the 2013 Conference.

In summary, arriving in South Korea for the 3rd International Conference on Social Enterprise in Asia (ICSEA) between Friday 4th and Sunday 6th July felt like I had been provided with the opportunity to tie up some loose ends and explore new avenues of cooperation. I reconnected with many delegates from the Belgium symposium, South Korean, Japanese and European and elsewhere from South East Asia. I connected with new collaborators from the very first session on Friday morning where there was a persuasive presentation on South Korean public administration which highlighted the developmental benefits yielded from investments into communities and civil society partnership, in contrast to Ghana which was in a similar position to South Korea in the 1960's but invested mainly into infrastructure projects. I am now in discussion with the author on a paper to take the 'community' variable further and theorise how this approach might work in other socio-cultural and historic contexts. The conference days were long and intensive, other interesting presentations included one on school tuck-shops supported by government policy alongside the encouragement of cooperative models. It was invaluable input into my writing up of action research in Cambodia which among other things led to the implementation of a school canteen.

I delivered a presentation of the working paper: Social Enterprise Typologies in Cambodia, alongside my friend and associate Dr. Sothy Khieng, who had just days earlier passed his PhD defence at the VU University Amsterdam. The working paper has been produced as part of the International Comparative Social Enterprise Models (opens in a new window)(ICSEM) project which strives for international mapping of social enterprise typologies, emergence and patterns of institutionalisation. In this presentation I was also lucky to witness a great presentation about social enterprises in the Pastoral Regions in Alukeerqin Banner, Inner Mongolia. This presentation showed how common property resource social enterprises producing alfalfa and supporting sheep herding have suffered at the hands of policy support for other kinds of cooperatives which focus exclusively on membership benefit. Out of this there is a strong case for thinking about the raison d'être for some kinds of social enterprise as 'commoning enterprises' that both preserve and produce the commons. In Cambodia there are cooperatives which serve this function, wild honey cooperatives and resin producer associations that preserve forestry, granulated palm sugar enterprises that create incentives for palm tree conservation, a manufacturer of cooking briquettes that uses coconut shell in the effort to reduce the use of wood-fuel. At the same time Cambodia is experiencing rampant enclosure through economic land concessions which go alongside land grabbing and relentless abuses of human rights. I am following up with the presenters from Inner Mongolia on collaboration for a cross-country paper along these lines. Alongside the great input of this conference into my thesis I made great contacts and new friends, got to see a country I had dreamed of visiting for several years and the chance to experience some fantastic new food. 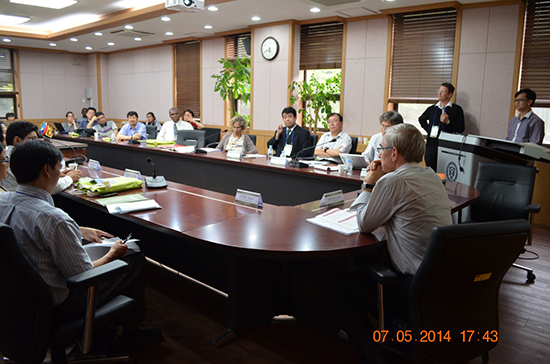 Above: Isaac presents at the conference.