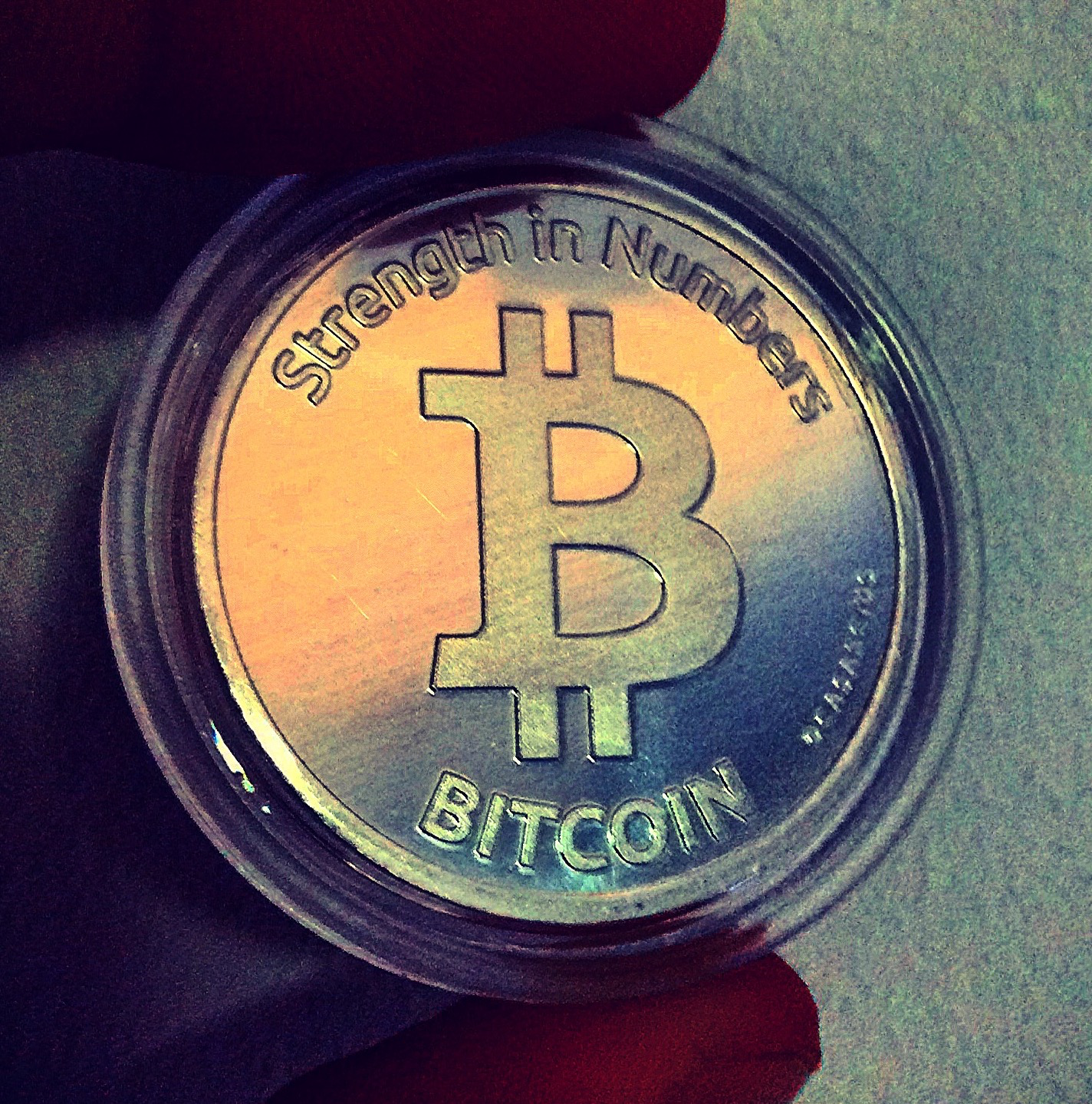 Above: a loadable physical complete with public and private keys that allow me to 'store' digital bitcoin values on the coin - the actual value exists on the blockchain which the keys provide access to

Imagine a world without banks, where people could manage transactions without central monetary authorities skimming your accounts and identifying your every move. Believe it or not, this world already exists, thanks to the revolutionary Blockchain technology driving one of the 21st century’s most extraordinary inventions- Bitcoin.

Bitcoin has universalised and democratised the concept of money. Its innovative Blockchain technology enables users to exchange value via a universal protocol, as opposed to current fragmented networks of money that perpetuate boundaries and borders. In the Bitcoin system, users can pay for a parking meter in Sydney, a hotel room in Germany or a beer in England without having to juggle different payment systems and currencies, let alone notes, credit cards or cheques.

Yet despite the liberation this new technology promises, there are some drawbacks. Market manipulation tactics, which are illegal in official stock markets, are anyone’s game in the pseudo-anonymous, unaccountable Bitcoin market. The market is volatile, and there have been problems with hackers. Yet despite these hitches, Bitcoin remains an extraordinary infrastructure to facilitate the exchange of economic value, anywhere in the world, at virtually no cost.

At the Sydney Bitcoin Meet-up Group in January, the nascent currency was experiencing a low market price. Amongst jokes of beers being the most expensive they had bought for over a year – many attendees were paying with Bitcoin – there was an air of confidence and control throughout the group. Laptops and smartphones in hand, attendees were provided with a real-time analysis on the factors thought to be shaping the current market movements.

The general consensus was market manipulation tactics were causing the fluctuations. Apparently, a big player was shorting the value by selling off a large amount of bitcoin, only to buy them back more cheaply when smaller investors followed their lead and helped drive down the market price. In other words, the market fluctuation was not an exit strategy based on the belief of Bitcoin’s immanent collapse, but a well-executed re-entry strategy to maximise profits in the belief that the value will rise.

In the following days, this judgement seems to have been accurate. Some of the meet-up attendees were therefore right to scramble for the buy button on their devices and fill their Bitcoin wallets, while others were annoyed this hadn't happened sooner after payday so that they could take better advantage of the staged market lull. But most just enjoyed watching the ride and went back to talking about the long term.

More than anyone else, Bitcoin proponents understand the currency is an experimental system subject to volatility and fluctuation based on market sentiment, reputation risks and manipulation. There are certainly ways that Bitcoin may conceivably crumble, but considering it has already survived so many rounds of near death crashes it seems unlikely. In fact, Andreas Antonopoulos states that the very resilience of Bitcoin provides value in itself, whether you see it as a currency, a commodity or an asset- or a combination of the three.

Even if Bitcoin fulfils the naysayers’ prophecies and falls into the depths of regression, block chain technology has the ability to transform financial services, and is undoubtedly here to stay. Author and ex-broker Brett Scott describes this technology as ‘a method for creating decentralised peer-validated time-stamped ledgers’, a digital tapestry of transactions weaved by ‘miners’ who hire out their computational power to collectively maintain the ledger.

There are certainly issues with Bitcoin as a long-term currency but, like e-mail to the Internet, it is just the first application making use of a new technology, in this case Blockchain technology. According to tech guru Joichi Ito, Bitcoin has the efficacy to transform the way in which information is stored and disseminated in banking, law and accountancy via smart contracts, techno-equity and decentralised registers. As it stands, Bitcoin remains an exciting infrastructure to exchange economic value globally to anyone connected to the network, which has the potential to be life changing to possibly billions of people when you consider more than half the world are unbanked and the extortionate fees charged to migrants for trans-border remittances.

For social scientists interested in how different forms of money connect people through space, the ability to evolve socioeconomic practices across varying geographies and pre-existing boundaries whilst demanding a rethinking of financial landscapes is as interesting as it gets. So, despite the market fluctuations and its loose trading regulations, Bitcoin is undoubtedly one of the most exciting technological advancements in finance in the twenty-first century.