London Olympics: Society outside the stadium and the spectre of 7/7 Sydney's Martin Place was a popular meeting spot during the 2000 Olympics.

Professor David Rowe will comb the streets of London during the 2012 Olympics to investigate the ‘city beyond the stadium’, comparing its attractions and dangers with other recent ‘mega-events’, including the Sydney Olympics.

David will collaborate with Australian and UK-based colleagues on an investigation of London’s public spaces, to gauge the dynamic of the Olympic experience.

“I am interested in analysing the urban regeneration legacy of hosting the main Olympic Stadium at Stratford, in the Borough of Newham, one of the most deprived in Britain ,” says Professor Rowe. 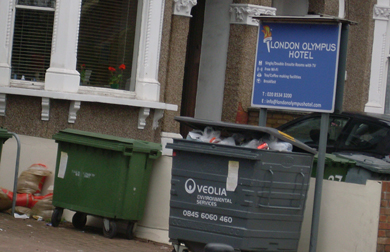 A hotel near the London Olympic Stadium earlier this year.

“A brand new Westfield Shopping Centre stands between the Olympic transport hub and the Stadium and there are expensive new apartments nearby. The impact on local residents and businesses is, as is usual with the Olympics, a matter of keen debate.”

Professor Rowe says that the recent spread of ‘Live Sites’ featuring cultural and leisure activities, reflects the self-conscious attempts of government agencies, city councils and businesses to organise urban events for people who missed out on getting tickets or cannot afford them.

“Free public offerings such as Live Sites and low-cost, family-oriented activities are very important as a means of justifying the enormous investment in these mega-events,” says Professor Rowe.

“Only a relatively small number of people can attend Games venues, and the rest can watch the action live on television and computer at home. Somewhere in between is the Olympic-related urban experience that gives a strong sense of ‘being there’ without much of the cost and inconvenience.”

“The alienating suspicion of strangers and fear of urban public space that city users often experience can, at least temporarily, be overcome when the Olympic city comes alive,” he says.

“Having already observed the Live Sites at the Sydney Olympics and the 2010 World Cup at Darling Harbour, it will be instructive to see how London compares.”

However, Professor Rowe says hosting the Olympics is not all fun and sociability.

“Especially since 9/11, concerns about urban terrorism have come to the fore,” he says.

“London 2012 is regarded as a major target, and some people are avoiding the city during the Olympics for that reason. I was in the city on 7/7 when the bombings occurred the day after London got the Games. One moment Trafalgar Square was a crowded place of celebration, and the next it was left to the pigeons watched over by armed police.”

Professor Rowe says the level of surveillance in London is already the highest in the world, and the Olympics will be Britain’s largest security operation since World War II.

“It will be fascinating to see how the tension between the freewheeling Olympic carnival and the intensive security apparatus is played out,” he says.