Western Sydney University researchers have reviewed the pilot Youth Koori Court in Parramatta, and determined the model to be an effective and culturally appropriate means of addressing the underlying issues that lead many Aboriginal and Torres Strait Islander young people to appear before the criminal justice system.

Melissa Williams, Director of the Office of Aboriginal and Torres Strait Islander Employment and Engagement at the University, is a descendant of the Bundjalung people and an author of the ‘Youth Koori Court: Review of the Parramatta Pilot Project’ report (PDF, 4643.23 KB).(opens in a new window)

“Aboriginal and Torres Strait Islander people in NSW are 25 times more likely to have experienced detention by the age of 23 than other young people,” says Ms Williams.

“They also suffer higher rates of homelessness, inadequate schooling and unemployment than their non-Aboriginal counterparts.”

The report describes a court that is dedicated to addressing the significant social issues that face Aboriginal and Torres Strait Islander young people, by:

In conducting the review, researchers observed hearings; interviewed young people and Elders; analysed Action and Support plans; and compared the time in custody for those involved in the program.

Professor David Tait, a co-author of the report from the University’s School of Humanities and Communication Arts, says the study showed that the young people engaged with the Koori Court were less likely to end up in detention.

“Prior to the Youth Koori Court, the 33 young people involved in the study each spent on average 57 days in detention. During their involvement with the court, they only spent on average 25 days in custody,” says Professor Tait.

“Over the research period, over half of the items listed on young peoples’ action plans were completed by the time of sentence – with the most success reported in getting identity documents and managing harmful drug habits.”

Professor Tait says the Youth Koori Court is based on sound principles developed in problem-solving courts.

“Like drug courts – which have proven to be effective in reducing re-offending – the Youth Koori Court defers sentencing until the factors which place them at risk of reoffending are addressed,” says Professor Tait.

“For many of these young people, their issues with the law are either a direct result of, or compounded by, the issues they face in their daily lives – to do with jobs, safe housing and access to essential services.

“By dealing with these underlying issues, the court reduces the likelihood that the person will get into trouble in the future.”

Ms Williams says that by offering the opportunity to engage with Elders and attend cultural events, the Youth Koori Court enables young people to keep their culture strong.

Uncle Rex Sorby, a member of the University’s Elders on Campus program, assists in the Youth Koori Court. He says Aboriginal and Torres Strait Islander people often fell into crime because of the lack of social support.

“Youth Koori Court is one of the essential services that should be introduced for Aboriginal people – particularly for Aboriginal children – because they can come to this court and we can adjudicate on them and set them straight and put them back on the right path."

"We need to educate parents as well. This is a step to reduce the over-representation of our people in the system, if we don’t invest and take the next step together, then we fail communities,” says Aunty Sandra. 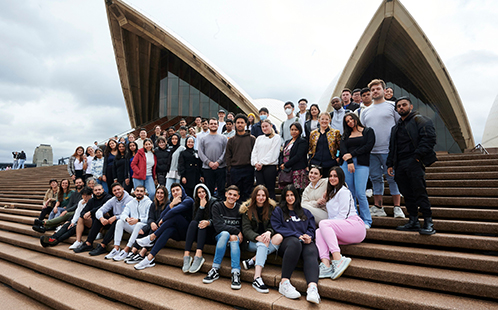