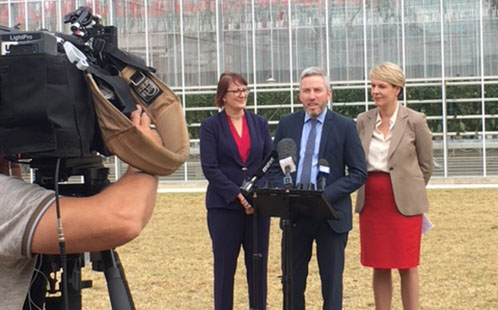 The Acting Leader of the Federal Labor Opposition, the Hon Tanya Plibersek MP, has announced a $20 million commitment to Western Sydney University to create a specialist Agri-tech and Protected Cropping Research Facility at the University’s Hawkesbury Campus in Richmond, NSW.

To be established adjacent to the University’s state-of-the-art, $7 million glasshouse, opened in 2017, the new facility will enable the world-leading gains in intensive food production and technology made in the glasshouse, to be harnessed through vastly upscaled research.

Vice-Chancellor of Western Sydney University, Professor Barney Glover, noted the University has focused on agribusiness teaching, research and industry collaboration at its Hawkesbury campus as part of a decadal strategy that responds to the next wave of nationally significant agribusiness opportunities.

Identified as a ‘priority industry’ under the Western Sydney City Deal, agri-technology has the potential to value-add $20 billion to the agriculture sector. Combined with the opportunities presented by Western Sydney's Badgerys Creek airport, the glasshouse and new Labor funded research facility will have access to markets around the world allowing 36 hours from production to consumption.

“Labor’s funding commitment is the strongest indication from any government that it is serious about developing this key knowledge-job sector in western Sydney. With this support, the Hawkesbury region can play a central role in the economic transformation of western Sydney. It’s also a win for research, skills growth and industry partnership possibilities,” said Assistant Vice-Chancellor Dr Andy Marks.

The new research facilities will focus on food production and biosafety, and will have the potential to commercialise locally developed food technology, particularly in the Indo-Pacific region. “It’s about using technology to produce higher yields of a superior quality on a smaller footprint and in a quicker timeframe,” said Dr Marks.

For further information and interviews, please contact Imogen Corlette, Director of the media unit at Western Sydney University, on 0406 316 249 or email media@westernsydney.edu.au.

About The Hawkesbury Institute

Opinion: Disabled people were Holocaust victims, too: they were excluded from German society and murdered by Nazi programs

When Dominic Perrottet admitted to wearing a Nazi uniform to his 21st birthday party, he apologised to Jews and veterans – but not to the other groups who were persecuted by the Nazis.

Opinion: Got gastro? Here’s why eating bananas helps but drinking flat lemonade might not

Doctors are reportedly concerned about a spike in the number of kids with gastroenteritis – when tummy infections can cause nausea, vomiting, diarrhoea, fever, abdominal pain, headache and muscle aches.